Blueprint Takes a Ride Through the Multiverse with Rick and Morty 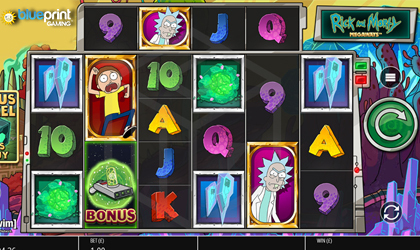 Blueprint Gaming has officially announced the release of its Rick and Morty slot game that was developed in cooperation with Adult Swim and Warner Bros.

The new slot will take the fans of the show on a thrilling adventure through space, time and the multiverse itself.

Being one of the most popular TV shows around, Rick and Morty has become a cultural phenomenon thanks to its raw humor and fluid writing. Capturing the essence of this show in a slot was a task that fell in the developer’s lap. This software provider was the one to officially acquire the license to release the game from the copyright owners – Adult Swim and Warner Bros.

Aesthetically speaking, the game brings a theme that perfectly depicts the artistic style of the show. The whole thing takes place in outer space allowing the creative team behind the game to use stars as the backdrop.

The reel frame gives the dark emptiness of space some contrast with its mechanical graphics. As for the symbols, players can expect to find their favorite characters here, including both Rick and Morty as well as a number of their enemies.

Sticking with What Works:

The developer decided to make this cinematic release truly special by basing it on the all too familiar Megaways mechanics. Developed by Big Time Gaming, this base game system offers dynamic rows across 6 reels.

…players have access to 117,649 paylines per spin. Although exciting on its own, the title brings other great features that promise to further spice up the overall experience.

For starters, every win during the base game will trigger a cascade, allowing players a much better chance of winning big. Then, there are the three different bonus spin modes – Pickle Rick, Federation Wild Spin and Vindicator Bonus Spins.

On top of all that, players can choose to activate the Bonus Wheel at any time and be granted a random combo of bonus rounds and bonus spins.

Jo Purvis, Director of Marketing and Relationships at Blueprint, said: “Wubba Lubba Dub-Dub! We’ve brought the hugely popular Rick and Morty™ to the reels for a trippy gaming experience packed full of cascades and bonus features. We have a strong reputation for delivering engaging branded games that bring films and TV shows to life and our design and development team have once again delivered with an out of this world slot.”

Blueprint Gaming is one of the leading software providers in the iGaming industry with headquarters in the UK. The company has been mainly focused on domestic markets only to turn to other regions as the business grew larger.

Over time, it showed up on Gauselmann Group’s radar and ended up joining this massive conglomerate.