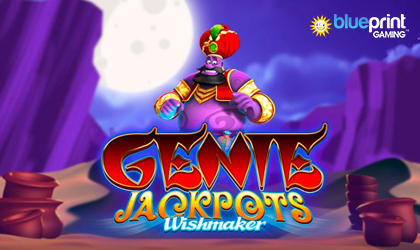 Blueprint Gaming is bringing another awesome game to the reels.

Titled Genie Jackpot Wishmaker, this new slot game is all about…

…bringing the Magic of the win to the reels. Packed with awesome features and a thrilling base game mechanic, the new title stands to bring potentially awesome rewards to players.

The Magic of the Reels:

We’re going back to the days of magic with this one, as everyone’s favorite genie takes the stage one more time.

In fact, the Genie…

…has been anticipated for a long time, being one of the developer’s most popular franchise characters. The new game is all about looks and features.

Fans of the series will appreciate the familiar visuals that perfectly match the whole genie from the bottle theme that the supplier went with on this one.

Symbol design is also in line with this idea, with iconography that sends the player into the magical world of ancient legends.

Features from the Bottle:

As far as features go, this 5x3 slot is packed full of them. For starters, there’s the bonus spin mode with its quirks and features.

Then there are numerous base game modifiers…

…that ensures a thrilling ride even if you don’t trigger any mini-games. The Big Money Bonus is the star of the show, allowing players to potentially hit a massive jackpot.

Jo Purvis, Director of Marketing and Relationships for the developer, said: “Genie is back and bigger than ever thanks to the pounds he’s piled on during lockdown! His magical lamp is brimming with fantastical features that will make wishes come true in this enchanting new slot. Feature-rich games like Genie Jackpots Wishmaker have always been popular in the UK market and continue to grab the attention of a new audience across Europe, with a generation of players appreciating the many different ways a spin can result in significant wins and fun gameplay.”

Blueprint Gaming is a premier software provider coming to us from the United Kingdom. In fact, the company was initially focused exclusively on the domestic markets of the UK, only spreading its reach rather recently. Driven by innovation and the need to bring players high-quality entertainment, it quickly grew.

The team behind the brand is capable of recognizing what the markets need and how to deliver it. As a result, the company has managed to build a massive following as well as a large distribution network worldwide.