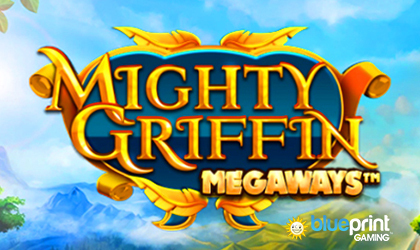 Blueprint Gaming has just released a new slot game titled Mighty Griffin Megaways. Packed with awesome features, the new game is promising to bring plenty of entertainment to fans all over the world.

The supplier has also put together an immersive theme for this release, adding to the overall experience.

The latest slot is all about Griffins – mythical flying creatures that are at the heart of many legends and tales. The game is based on a medieval theme and brings a cartoonish aesthetic that is easy on the eyes.

…is dominated by a view of a massive castle and the surrounding scene. The creative team even added an appropriate soundtrack that completes the mood of the game.

Symbol design uses the all too familiar card royals for the lower-paying deck, while the higher paying deck includes symbols such as crowns, rings as well as the Mighty Griffin himself.

The decision to go with the Megaways core game mechanic means that players can expect a wild ride! This slot runs on a variable set of rows and 6 reels in total. All of the potential combinations add up to 117,649 ways to win.

Despite such an exciting core game…

…the brand has also added several special features. First and foremost, players who decide to try out this slot will have a chance to hit the Jackpot King Deluxe feature. This is a progressive jackpot system that can potentially bring immense prizes to lucky winners. Then, there’s the Golden Streak bonus spin mode and more.

Jo Purvis, Director of Marketing and Relationships at Blueprint, said: “Players are on a quest to find the mighty griffin as the legendary creature flies across the sky to deliver big prizes onto the reels below. With cascading wins and Jackpot King Deluxe on offer, this latest release is packed full of fun features that will keep players immersed for long periods of time.”

Blueprint is one of the leading software providers in the iGaming industry. The company is located in the United Kingdom and has been mainly focusing on the UK domestic markets. However, after initial success, it decided to expand its operation to Germany and Italy.

With a dedicated team of professionals leading the brand forward, this company has started making waves in the industry. So much so that they have caught the attention of the Gauselmann Group – one of the largest entertainment companies in Europe. Today, the company is still producing some of the best slot games on the market, making sure that their level of quality stays traditionally high.