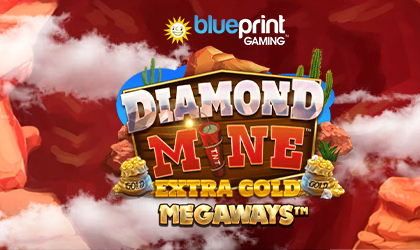 Packed with explosive features and potentially lucrative game mechanics, this new game promises a thrilling ride for fans of the Megaways type games.

Searching for Treasures Underneath the Surface:

The supplier has announced the release of a new slot game titled Diamond Mine Megaways Extra Gold. The game is all about experiencing the cascading wins in a…

…package that gives off a strong Wild West vibe. Players are transported back into the days of gold rush adventures when bold entrepreneurs could make life-changing amounts in just a single moment of luck. The game features a cartoonish aesthetic that depicts…

…an underground mine. The creative team behind this slot title did a great job by making the reels look like the mine itself, thus giving the game a really unique feel.

Symbol design is perfectly in line with the theme of the game. The lower paying deck of symbols comes in the form of card royals featuring that old west font. On the other hand, the higher paying symbols represent tools and items you’d find in a mine. There are…

…barrels of TNT, pickaxes and shovels, sacks of gold and more.

The core game is based on the Megaways mechanic. This means that players have 6 reels and a varying number of rows to play with. The lowest number of rows that can appear on any given reel is 2, while the highest is 5. Overall, this game offers some 117,649 ways to win!

As far as special features go, players can expect to see a bonus spin mode packed with various multipliers. Additionally, there’s the mystery TNT barrel that transforms into any other symbol, thus increasing one’s chances to win. Last but not least, online casino  operators can…

Jo Purvis, Director of Marketing and Relationships at Blueprint, said: “Players will be in ‘ore’ of the golden nuggets and glittering diamonds to be found in our latest game release. This Wild West themed game is packed with bonus rounds, cascading wins and the Megaways™ mechanic, making the ‘prospect’ of winning even more exciting.”

Blueprint is one of the premier software providers in the iGaming industry. This company has made a name for itself by…

…providing high-quality slot games and other gaming content to players in key regulated markets. With a talented team of professionals driving the brand forward, it is constantly increasing its reach around the world.