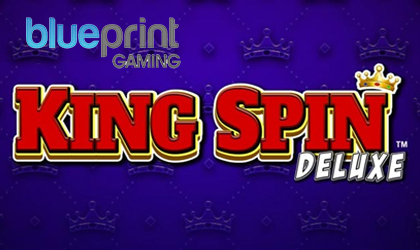 Blueprint, one of the premier content developers in the industry, has launched a new game. Titled King Spin Deluxe, the new title…

…brings great features and potentially lucrative bonuses, all packed into a retro package.

Back to its Roots:

The latest slot from Blueprint Gaming combines the old with the new in an exciting retro package that will undoubtedly attract more nostalgic players. Fans of olden land-based slot machines will recognize the ingenuity of the simple fruit over white reels design.

The overall theme is completely based on the retro feel with a simple background and vivid colors. With all-white reels, colorful symbols are very easy to spot and distinguish from one another.

Speaking of symbols, the developer went with a combination of classics for this slot. Players will see standard letters but also a number of fruits. Wilds and scatter symbols are unique and different compared to anything on the screen.

The base game is a much more modern design than the aesthetics let on. The brand used a standard 5x3 reel setup with 20 paylines. Estimated RTP is 93.20% with bets ranging from 0.10 to 500 credits.

Players who appreciate a more thrilling setup will like the bonus features. King Spin Deluxe brings a Bonus Wheel mode and a Jackpot Game.

The most interesting and attractive feature of this game is the fact that it is connected to the Jackpot King. This feature alone means that players will have the chance to win what is a potentially life-altering win.

Jo Purvis, Director of Marketing and Relationships at Blueprint, stated: “All hail the king, as prestigious prizes are on show in our latest classic-themed release. As we continue to expand our international footprint, it’s important that we offer a range of different games to operators and their players. King Spin Deluxe complements our existing offer, with its quickfire format set to resonate with casino players across various jurisdictions.”

With the release around the corner, the game will be available in all the supplier’s affiliated online casinos.

Blueprint is a premier UK-based game developer that offers some of the hottest titles on the market at the moment. Although they started out as a small team of dedicated professionals, they have grown to service over 100,000 land-based gaming terminals in three countries of the European Union.

This studio is known for chasing new angles and pushing the creative boundaries of modern online slots.

Such dedication to quality and innovation has attracted a number of top tier partners as well as the Gauselmann Group, one of the largest iGaming corporations in the world, tracking its roots back to 1957. The group not only grew with the entertainment and gambling industry, but they were at the forefront of online casino development as well.

Under such a strong umbrella corporation, Blueprint is free to express its creativity with access to new resources and people.