Blueprint Gaming Goes Back to Africa with Rhino Rampage 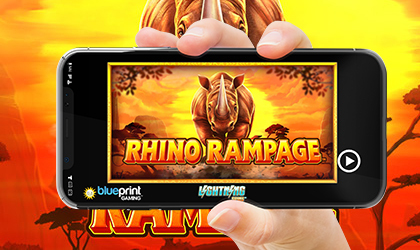 Blueprint Gaming is celebrating another awesome release this year as Rhino Rampage goes live across its network.

This new slot is all about Africa and…

…its diverse ecosystem. Players who are into wildlife are in for a treat as this release runs full of wild animals of all sorts!

The Wildlife and Golden Skies:

Doing Africa justice through a slot game is a tall order, even for this developer. This popular software provider has managed to do a great job depicting the cradle of civilization along with its diverse wildlife. Players are in for a treat as the new release brings all kinds of eye candy to the table.

The moment the game loads up, it becomes apparent that…

…the team went all out when it comes to visuals. Looking past the reels offers a great view of African nature basking in the scorching, golden sun. Up in the front, players are treated with great visuals on the reels as well!

Symbols are highly detailed and represent a number of wild animals that inhabit the African continent, including rhinos as well. That’s the higher-paying tier, the lower-paying one comes in the form of card royals, as usual.

Features to Match the Looks:

The game brings a brand-new feature called Lightning Spins. This 5x3 slot offers that familiar base game but is packed with different special game modes.

The new Lightning Spins offer a cash award and…

Then there is the Super Stacked Rhino Wild that can rack up the wins to 25,000x the original stake!

Jo Purvis, Director of Marketing and Relationships at Blueprint, said: “Lightning Spins™ brings an exciting twist to the free spins format by giving players the opportunity to not only claim significant wins but also scoop one of the game’s four jackpots. Along with colossal symbols and wilds, this wild new addition to our ever-growing library of games is set to cause a real rampage.”

Blueprint is one of the leading software providers coming from the United Kingdom. The company has been creating immersive slots and offering them to operators all over the world. Being in the industry for more than a decade, the supplier definitely has the experience and knowledge necessary to make instant hits.

All of those traits have put them on the radar of the Gauselmann Group – one of the largest entertainment companies in Europe. Being a part of such a massive family has allowed the brand to become even better when it comes to delivering innovation to its fans.