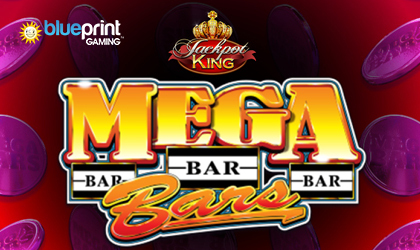 Blueprint Gaming, the United Kingdom-based provider, has released the latest addition to its revolutionary Jackpot King series. The best thing about Mega Bars Jackpot King slot lies in its simplicity with 10 active paylines and gameplay that has been proven to increase engagement between players.

As part of the Jackpot King series, the slot offers players the chance for massive wins. The progressive jackpot king system can be activated in any round, creating a level of anticipation and joy for all players. Winnings are paid out if 3 or more matching symbols appear on the reels, and the bonus symbol activates extra spins in this game. The new title has been shown to raise player engagement on provider's sites when used as a banner ad for jackpots on site. The developer’s partners have taken full gain of this advertising tool by leveraging and displaying jackpot amounts in various creative widgets on the site.

Blueprint’s Jo Purvis, Director of Marketing and Relationships said: “The Jackpot King series continues to prove incredibly popular. Mega Bars Jackpot King gives players who like their slots with a more traditional theme the chance to get involved and win life-changing sums of money. Players used to a classic casino look will feel right at home. Mega Bars Jackpot King is so easy to play and we’re sure it’s going to be another hit for this captivating series of slot games.”

Blueprint began operating in 2001 in Atlanta, Georgia. The German group Gauselmann acquired a majority stake in the company that year. The firm focuses on compliance and hires industry specialists to observe the game development processes to guarantee that its products pass the most rigorous compliance checks. Its portfolio includes internet games, mobile games. As its reputation and market share grew, they opened headquarters in different countries around the world and also created collaborations with famous names such as Bell Fruit Games, Gala Coral Group, Konami, Inspired Gaming Group and many other popular companies. It is currently considered recognized and respected software developers in the iGaming industry.