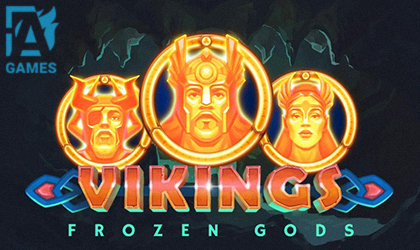 Brave and dauntless warriors have always caused admiration among people due to the fact that they can overcome any obstacle, doesn’t matter how big or small it is.

We do not see them frequently, but once the opportunity arises, we shouldn’t miss it! Now, with the newest video slot from AGames, players will get a glimpse of their world and how fearless these people are!

Strong and powerful, they have always protected the ones they cherished the most – family, clan and territory.

In this slot called, Vikings: Frozen Gods, users will go on a quest to win every single battle, collect prizes and keep loved ones safe.

Furthermore, this is a 5x3 video slot with twenty-five lines where coin value starts from 0.01 and goes up to 10.0. The one that pays the most is the symbol of four Vikings accompanied with pictures of swords, Scandinavian runes and axes.

Perhaps one of the strangest parts of this game, while at the same time, very interesting, is the Frozen Gods Meter.

Namely, players will stumble upon four gods which need three prey points to carry out their indicators.

Each time a non-winning spin is over, the Gods Meter will receive one prey point. If you manage to create three spins in succession without having any win, the indicator of the lower God will be filled up and the users will be bestowed with x2 multiplier bonus.

Gamers can give prey to an upper God only if the indicator of a lower God is finished. Furthermore, during this feature, x3, x5x and x10 Gods Meter multipliers are rewarded.

The good thing about this feature is the fact that even the less experienced players can earn something. Just keep in mind that the progress on the meter vanishes as soon as you either change your bet or you receive a winning spin.

It’s called Loki and it refers to popular mythological crook. The symbol that represents him is very crafty and cunning, still, if you play your cards right, you could potentially earn a substantial sum of money.

Moreover, this sign can turn into any God on the meter and imbibe every single prey point. Once he receives three prey points on the God indicator, the Loki Wild character will reveal itself on the reels almost instantly.

As in many other cases, it serves as a replacement for any other symbol (the only exception is the scatter) and it also moves randomly across the reels after each spin. It’s worth mentioning that several Loki Wilds can be seen on the reels at the same time!

One of the things that activates them is the scatter and with its help you can blast-off some sensational prizes!

It uncovers a Goddess who can launch five, ten or even fifteen casino spins if it is seen on the reels from three to five times simultaneously.

Moreover, both Loki Wilds and God Meter bonuses stay during this feature, which is good news.

Furthermore, a non-winning bonus spin boosts the indicator on the meter, while allowing the score to go up.

AGames has really developed an extraordinary game. Their latest video slot has achieved amazing success, therefore, they probably wanted to repeat it by creating a slot that is as equally good.