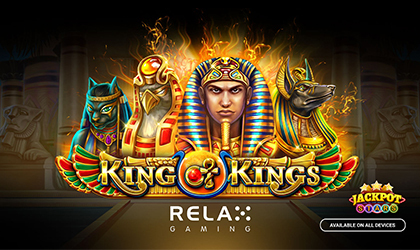 A major new-breed games and platform provider, Relax Gaming, seems to be very busy these days.

Besides frequently releasing brand-new slots, they have also made some huge deals with some of the most reputable corporations in the industry, including Videoslots.

Today we discuss its newest slot that came from their kitchen. It’s titled, Kings of Kings, and it seems very promising so far.

Why Do We Love It So Much?

Inspired by the Egyptian culture, this 3x5 slot with high volatility is going to take players on a journey to meet the upper class and see the benefits of leading a luxurious life.

As expected, symbols that represent gods, jewels and the pharaoh himself are placed on the reels to embellish them and add to the theme.

Relax wanted to spice things up by adding a randomly-triggered Jackpot Stars side game, which enables gamers to easily place a side bet and potentially activate a whooping jackpot of up to 12,500 times their stake!

“Relax Gaming’s slot portfolio has a firm grounding in expertly modelled mathematics and core gameplay, enhanced with truly engaging bonus or side features. King of Kings is another new format for Relax Gaming’s library that delivers on this philosophy.

The free spins mode unlocks an additional reel to boost the excitement, while Jackpot Stars adds an extra layer of chance that is sure to keep players coming back.”

A game that preceded this one is called, Dragons’ Awakening, and it is also an exciting adventure that sends players to the volcanic lair of charming yet quirky dragon Eldur.

Besides this one, we mustn’t forget to mention another Spectacular reel slot called Temple Tumble that quickly became one of their most successful games to date.

All in all, RG is slowly turning into a force to be reckoned with, as far as developing is concerned. They are always trying to supply their players with unique and refreshing content and along with that, over 570 games.

As we stated in the beginning, they are slowly consolidating their already solid reputation by continuously making new partnerships with equally successful corporations. Furthermore, in the last couple of months they have signed over fifty strategic deals.

Golden Calaveras is a Wild Ride for Online Slot Fans