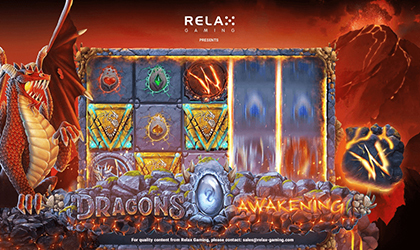 A creative content supplier and distribution platform, Relax Gaming unveiled a slot machine that is going to transport users into a place where they will get to meet an interesting dragon called Eldur.

And He Is Not The Only One…

Besides him, gamers will also encounter four other dragon spirits that represent the guards that are keeping the treasure safe. They are hiding it within their eggs.

Certainly, the most gripping feature of this game is called the Dragon’s Rage where one out of the four specters substitute all random Suited Rock characters until a winning combination arrives.

“Dragons’ Awakening is an exciting addition to our portfolio of premium video slots. It offers all the pace and features that we’re focused on building into our games and sets the reels ablaze with larger than life graphics. The intricately designed Dragon’s Rage feature puts big wins within reach and we’re proud of the unique blend of engaging mechanics.”

This game is completely different from their latest release called Temple Tumble an exciting slot machine where players get to explore an ancient temple as well as Cambodian jungle.

Ever since they were established, Relax managed to acquire an excellent reputation among other providers as well as the users.

Their portfolio contains more than 280 games and they are continuously offering fresh and inventive content figuring out ways to stay current and innovative. Furthermore, in the meantime they made a couple of significant partnerships with numerous equally successful companies.

A Reason For Celebration:

Approximately one week ago, they celebrated five years from making their top-quality, award-winning poker product.

They haven’t done this in a ordinary way. Namely, they did it by entering the French market together with their long-term client Kindred Group.

Daniel Eskola, CEO at Relax Gaming stated that this partnership is very crucial to them due to the fact that it will further accentuate the omnipotence and quality of their poker platform.

“We remain committed to the continued delivery of superior quality products to Kindred, but we’re opening the door for product growth further down the line by adding more operators and jurisdictions as demand dictates. Poker has and remains a core product for us and one we know we do well.” Not too long ago, they released a brand-new poker product called HexaPro where users can earn up to 1,000 times their stake very fast by encountering only two adversaries. This type of game is very popular among French people. Martin Stalros, CEO at Relax Gaming stated: “We have gained success with this product in many of Kindred’s other markets already and I’m very excited with the opportunity to give even more poker players the chance to enjoy the Relax Gaming poker experience, with a foundation built to be fun, fair and exciting.”