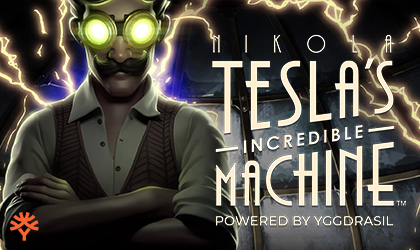 …the new game draws inspiration from the life of one of the world’s greatest minds. The studio behind this release promises an electrifying experience and plenty of interesting features.

The Workshop of a Genius:

The latest game from one of Yggdrasil’s partnered studios takes players right in Tesla’s own workshop where the Genius scientist brought to life some of his most impressive inventions. YGS Masters has gone above and beyond in an effort to portray Tesla’s environment in the most authentic way possible.

That has led them to treat the players of this slot to some of the best graphics on the market. The new release offers a highly immersive experience…

…with a highly detailed theme that includes various animated components. The has added a Tesla coil that comes to life every time the reels are spun.

On top of that, the entire background gives off a very mysterious vibe with all kinds of machines working seamlessly all around the reels. As the cherry on top, the whole room is full of somewhat ominous looking steam that hides the floor the entire time.

Aside from its stunning looks, the game features a standard 5x3 grid that runs on 25 paylines.

As far as special features go, there are several including the Energy Burst mechanic. This feature is triggered whenever the three similar symbols appear on the third reel. Once that happens, players will…

…be awarded one extra spin that utilizes one of the following three bonus features – Exploding Wilds, Reel Clone, Wild Substitution.

YGS Masters went a step further and added 3 additional levels to the Energy Burst mechanic, thus adding plenty of depth to the already interesting base game.

Stuart McCarthy, Head of Studio Partnerships at Yggdrasil, offered his comment regarding the new release: “We’re thrilled to release our second YGS Masters game, Nikola Tesla’s Incredible Machine. With its thrilling gameplay and immersive setting, it is an excellent addition to our burgeoning YGS Masters portfolio. YGS Masters is at the beginning of a very exciting journey, setting the bar even higher when it comes to game development and distribution standards. The next few months will be filled with even more electrifying news, so stay tuned!”

The will be available in all affiliated online casinos shortly.

Yggdrasil is a content provider known for delivering some of the hottest titles in the iGaming industry. Founded in 2013, this company is among the younger entities of its caliber. However, within that short timeframe, they have managed to establish a stellar reputation, grow their production capabilities considerably and become one of the leading content providers in the industry.

It also runs a massive partner program that works closely with some of the most talented independent studios on the market today.