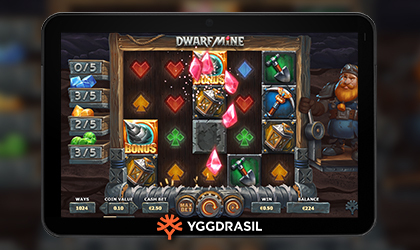 Finding valuable prizes is not always a piece of cake. Sometimes it takes a little bit of effort to find them.

That’s why one of the leading software suppliers, Yggdrasil, designed a game as a challenge to its players to see how far they would go to grab something precious.

Dwarfs As Your Sidekicks:

This video slot is titled, Dwarf Mine, and logically, the entire story is set inside a mine where gamers must thoroughly explore in order to find some hidden treasure and potentially collect sensational rewards!

Don’t worry; you’re not alone in this! A couple of diligent and resourceful dwarfs are going to help you find what you need. How will they do that? Well, they will do it by utilizing their superb tunneling machine that goes deep underground.

What Else Can We Find There?

A tool that is going to make things easier is the drill-shaped bonus character which expands the reel set by uncovering more rows of icons.

If players hit at least three bonus signs during one spin, it will instantly enlarge the reel set and it will no longer be 5x4 but 5x7. Besides that, it will also activate a slot spins round where the reel set is also bigger than usual.

If players fill any of those four collections, they will launch an entertaining Casino Spins mode and those crystals that were grabbed will be added to the reels as extremely valuable characters.

“With Dwarf Mine we’re especially proud of the way we’ve managed to create a gameplay experience where the mechanics and visuals work in perfect synergy.

Add to that the fact you can win more than 1000x your bet size from a single spin, we are sure we’ve got ourselves a game that will go down well with both casual players and seasoned slot fans.”

It’s worth mentioning that this game was developed on a proprietary HTML5 client framework, iSENSE 2.0+, which enables gamers to fully enjoy their favorite game. It doesn’t matter whether they are going to play it on mobile phone or computer, the quality is going to be exactly the same!

All their games (such as Wolf Hunters, Tut’s Twister, Trolls Bridge and many others) including this one too, are equipped with a group of in-game promotional tools called BOOST.