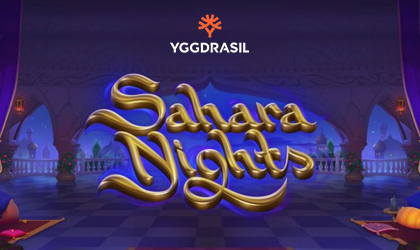 Yggdrasil has announced the release date for its latest game – Sahara Nights. Set to hit the market on September 24th, the new game will…

…deliver captivating graphics, rock-solid base game experience and a balanced dose of special features to boot.

Exploring the Secrets of Sahara:

Yggdrasil’s latest game, Sahara Nights, is set to release soon and, so far, the details look promising. The company has gone to great lengths to deliver a gaming experience worthy of the hype that surrounds this title.

The game brings a rather interesting theme that draws some of the inspiration from the story of Aladdin. Players will find that the two share similar characters, especially the whole blue genie line. Graphics are one of the brighter aspects of the game. This slot features a theme that features a distinctly Persian vibe with large cities in the desert.

Scenery switches from night to day depending on which game mode the player is in. With that said, both combinations offer a truly immersive gaming experience that draws players in and keeps them coming back.

Symbol design comes in the form of various rubies for the lower-paying set, while the higher paying set of symbols features the main characters of the storyline.

Needless to say, the attention to detail is on par with the rest of the game.

Speaking of which, the base game mechanics make this release a very familiar one. The supplier has gone with a standard 5x3 grid for this title, going with a proven concept over more exotic options.

The game runs on 20 fixed paylines and has an estimated RTP of 96.2%. As far as special features go, the brand has kept things relatively simple with the addition of a bonus spin mode and sticky expanding wilds. On top of that, players will also have the chance to win the super highpay symbol and improve their chances for a potentially high win.

Even with limited information available, it isn’t hard to recognize that this game promises to deliver that classic Yggdrasil experience. Once released on September 24th, the title will become available to the its affiliated online casino operators worldwide.

Yggdrasil is one of the premier providers of top tier slot games in the industry. Founded in 2013, this company has quickly gained exposure and established their presence in the most competitive markets around the world. Since then, they have become an authority in the industry, enjoying respect from their peers and growing large fan bases wherever they have a presence.

The company holds a number of licenses in the UK, Malta, Gibraltar, and Romania. Their innovative approach to slot games has also earned them…

…quite a few awards from EGR B2B and The International Gaming Awards. Quality content in combination with the thirst for innovation has brought numerous top tier operators to this brand’s doorstep. That is a trend that is still in full effect.