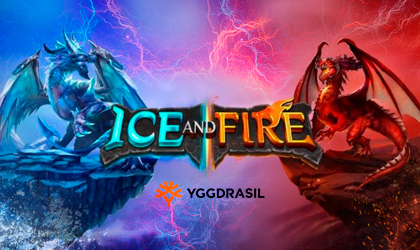 Yggdrasil has announced the release of a brand-new slot game titled Ice and Fire. The game features a theme of the eternal battle between two completely different extremes. However, the looks are only the…

…beginning! The title is all about awesome features that are bound to make someone’s day. It was designed by DreamTech Gaming exclusively for the developer.

The visuals are stunning and represent two beings, two completely opposite elements locked in eternal battle. On one side is the…

…fiery dragon while an ice dragon stands opposing him. Feature-wise, it is a 5x5 slot that uses cascading reels on every winning spin. Additionally, there are locking wilds that get frozen into place…

…once drawn. To enter one of the special features, the Bonus Spin mode, players will need to get four or more winning cascades in a single spin. Once that happens, players are forced to choose their dragon and go to battle with the opposing elemental.

This highly volatile slot also features various multipliers that can be triggered during the standard bonus spin game.

Stuart McCarthy, Head of Studio Partnerships at Yggdrasil, commented on the new release: “The YG Masters programme has gone from strength-to-strength in the last 12 months, and we are marking ICE 2020 by releasing our newest title, Ice and Fire. The game offers a completely new flavour to our portfolio and its action-packed gameplay will excite fans across the globe. Our YG Masters programme will undergo significant expansion in the upcoming year, as part of our new Publishing division, so this marks the start of a thrilling period of expansion for our team.”

Peter Walker, Product Owner at DreamTech Gaming, also offered a commented regarding the new game: “Ice and Fire is a thrilling creation pitting two opposing elements against one another, as fearsome dragons roam the reels in search of giant wins. We are delighted to release our first title through the YG Masters programme and look forward to a continuing partnership with Yggdrasil in the years to come.”

Yggdrasil is a premier software provider located in the Nordic region. The company stands out from the rest due to its innovative spirit that has allowed it to…

…affect the industry in a number of different ways. Aside from its massive portfolio of quality games, it also offers a number of third-party slots. This is made possible by a massive network of providers that it works with, who create exclusive slots for this company.