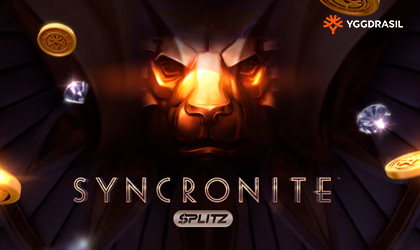 As the third Splitz game in the groundbreaking Yggdrasil series, the developer again created an innovative slot machine called Syncronite. This game differs from the other two retro titles with the Splitz mechanic and the reel feature proves again to be an exciting combination that is truly amazing, plus the jazz soundtrack adds a nice touch to the game.

Placing at least 3 adjacent symbols from left to right will give players winning combinations and wager-wise players can place bets between $0.2 up to $20 per spin. A success rate of 27.34% means an average of 1 in 4 rounds is a winner, and an RTP of 96% is pretty good too. This is a high-volatility title which means that players should net wisely in the long run, nevertheless, the game has a maximum potential win of a stunning 64800x the bet, which means an amazing $1,296.000 with a maximum placed bet. Although players will miss the bonus round, however, the interaction between the two features can result in big payouts.

Yggdrasil’s Senior Games Strategist, Jonas Strandman said: “Syncronite is a game for the true casino lover with a premium design and high gambling value. The mechanics are all familiar to players, but the combination of Synced Reels and Splitz is a killer combo, giving so many thrills and excellent win potential. Do you know any other game that can pay out 64,800 times the stake in one single hit, straight from the base game? Despite the insane win potential, the game will be easy on the players’ bankroll, giving decent mid-sized wins often enough to keep the interest up. Syncronite is an impressive production with balanced math and classic gambling excitement. It’s a game that all player types can appreciate and love.”

Yggdrasil's software is one of the most advanced in the industry. They are using HTML5 language and iSense technologies in all their slot machines. With these new and innovative technologies, their games work perfectly on all types of major devices and platforms, including iOS and Android. The brand is controlled and licensed by different agencies including the Romanian National Gambling Authority, the UK Gambling Commission, the Malta Gambling Authority and the Gibraltar Regulatory Authority.