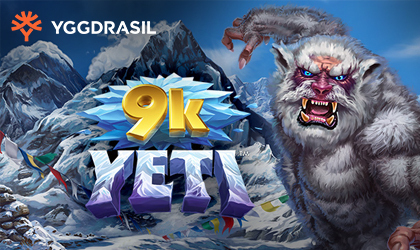 4ThePlayer has announced the release of a new slot game titled 9K Yeti. Set in the snowy planes of Mount Everest, the new game takes players on an exciting adventure…

…where they will run into all kinds of lucrative rewards but also mysterious creatures that lurk nearby.

The Monster at the Peak:

This latest title is a special one, taking players on an icy adventure to the top of the tallest mountain in the world. That alone would have been enough of a theme inspiration, but this company took it a step further! The aesthetics of this slot are all about the cold and mysterious peaks of Mount Everest.

Players will get a glimpse of what it looks like to climb the highest point in the world. The studio went into detail in order to make the whole thing more immersive. Those who are familiar with Nepalese traditions will find things such as Nepalese prayer flags – colorful patches of fabric which have…

…been the integral part of the Mount Everest experience. Now for the even more interesting part. The game hides a monster near the peak! As you’ve guessed it from the title of the game, it’s the Yeti.

The addition of such an iconic cryptic creature pushes this slot from interesting to intriguing.

Excitement on the Reels:

The theme is not the only thing this game has to offer. The game packs a smooth core game mechanics paired with a few…

…tasteful special features that improve the overall experience. The symbols in this game feature the lower-paying royal card icons. The higher paying deck comes in the form of mountaineers and of course the Yeti himself.

This 5x4 reel slot game runs on a 4096 ways to win system. Alone, this fact makes this title much more attractive. Adding the max potential win of 9000x to the equation pushes everything even further into the awesome territory!

As far as special features go, there is the Snowstorm feature that can turn a losing spin into a winning one. Triggered by having both the Yeti symbol and the Everest Wild symbol, this feature shuffles all of the symbols on a losing spin in a way that turns them into a guaranteed winning spin. Aside from this feature, there is also the bonus spin mode that can yield up to 88 bonus spins!