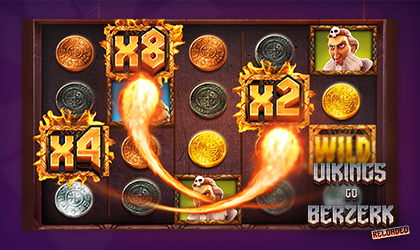 Vikings Go Berzerk Reloaded is played on 5 reels, 4 rows, and 25 active paylines. It features a maximum potential award of 25,000x the bet, which is the highest potential win in the Viking series. The RTP is 96% and the betting range starts at $0.25 and goes up to $50. Players can win up to 9 extra spins, and there is also a bonus feature and option to buy a bonus round.

Yggdrasil's CEO is behind the idea of the Vikings series, and the games were developed thanks to the close partnership between the company's game studios!

Fredrik Elmqvist, Yggdrasil CEO and Founder, said: “Three years after the last chapter in the Vikings series we thought the time was right to create another sequel that takes the gameplay to the next level while maintaining the thrilling elements that has made the original titles so popular. Our Vikings series has had players spellbound for years and have proven that longevity is possible with the right combination of a great theme, action-packed gameplay and wild features.”

Yggdrasil is an online casino provider that has changed the online gambling world. The company was founded in 2013 with its first license and was not the industry favorite at the time. However, its reputation has grown rapidly over the years. Later, in 2014, the provider launched the iSense platform, which allows customization of new versions of games on mobile and desktop devices. In 2015, the team developed the Boost promotion tool, and the following year introduced the social media tool Brag, which allows players to celebrate important victories with friends. It has released many popular games like Casino Zeppelin, Golden Fish Tank, Legend of White Snake, and others. The company was recognized for its success and received the Innovator of the Year award in 2019, 2018 and 2017 at the International Gaming Awards.