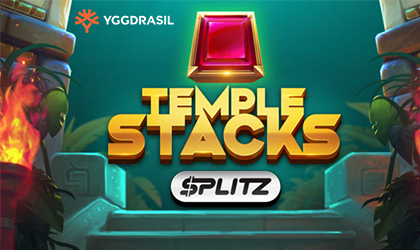 Yggdrasil, a highly innovative software provider for the iGaming industry, has announced the release of the first game from their Splitz series.

This Nordic giant is promising to completely change the way the industry sees slots with this new technology and Temple Stacks represents the first step.

This newest game is a true gem of innovation in a field that many feel has stagnated for a long time. With the release, the developer will be showcasing their new…

The game takes place in a South American jungle. More specifically, a temple belonging to the Aztec empire. In accordance with that, the entire scenery is all about that Aztec iconography. While the area behind the…

…reels represents a dense triple canopy jungle during a sunset, the scenery in the immediate vicinity of the reels is packed full of ancient ruins and similar motifs.

Symbol design is where things become even more interesting graphics wise. Some symbols depict solid colors while others represent various…

…animals etched in stone in a crude way that matches the artistic format of those ancient civilizations that have inspired this game.

Innovation at the Core Level:

The 5x3 slot comes across as a fairly standard game. However, it features a brand-new payline system that opens up a staggering maximum of 248,832 ways to win. This works by having…

…anywhere from three to nine stacked symbols fill the reels, thus expanding one’s chances of winning. Special features are centered around the progressive bonus spin mode where players can level up from the bronze rounds all the way to diamond rounds.

Jonas Strandman, the Senior Product Strategist for the brand, said: “With our Splitz™ mechanic offering thousands of ways to win, every spin could generate huge rewards and we couldn’t be more excited to launch our first Splitz™ title. We eagerly look forward to seeing how the game is received by Yggdrasil fans across the globe.”

Yggdrasil is one of the largest software providers in the Nordic region. The company has been known as a driving factor behind slot game design, with its innovative features and high-quality graphics.

The addition of Splitz core game reinforces this claim as it adds a new base game mechanic system to the industry that is slowly reaching maximum saturation as far as existing systems go. The team behind the brand is comprised of highly motivated individuals who are all about producing games that players will want to play. Because of that passionate relationship with the industry, they have grown a massive network of affiliated operators all over the world.