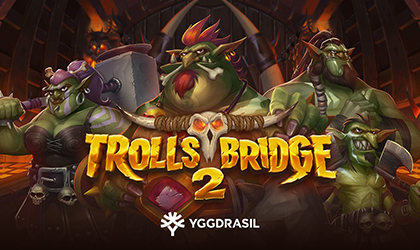 Yggdrasil’s portfolio is full of awesome titles that sit well above the market average. However, there are a few games that have stood out over time. Troll Bridge is one of them. The news of the sequel created a lot of hype among the fans of the original. Now that the game is hitting the shelves, the hype is even more intense.

As expected, the OG troll crew is back for more adventures and even more wins! The software studio behind the title has crammed a lot of cool features in this new release, which promises to make it even more fun than the original.

One of the main factors behind Troll Bridge’s initial success was the combination of base game mechanics, special features and a fun storyline. The sequel slot brings a lot of that, with familiar gameplay but also a few additional mechanics that will spice up the player experience.

The first major upgrade is Colossal Symbols. On top of that, getting three scatters in the base game will drop the drawbridge that reveals a pick and click gate. This feature has the potential to open the extra Spin Dungeon. Special features don’t end there, though. Players can also activate the Golden Bet feature before the Spin dungeon kicks in. That way there is a possibility that players can get an extra pick before reaching the dungeon.

Yggdrasil has also included a few completely random special features. To be more specific, we are talking about the Bonus Cauldron. It can appear at any moment, completely at random, and bring spins or coins to the player. But wait, there’s more! Players can also run into Flaming Boulders that get flung at the reels and bring with them various multipliers. Last but not least, the game features a Colossal Troll. If you’re lucky enough, the troll will turn wild in bonus spin mode which translates to massive awards for the player.

Jonas Strandman, Senior Product Strategist for the brand, said: “Troll’s Bridge was remarkably successful for Betsson, and later across our entire network, with tons of features and a theme that really resonated with players. It came about with a combination of Betsson’s top-notch ideas and Yggdrasil’s tight execution. The collaboration for Troll’s Bridge 2 was no different – and the result is nothing short of mind-blowing.”

The game will be available in Yggdrasil-partnered online casinos.

The company serves as one of the premier software providers in the industry and an authority in the realm of superior online gaming solutions for iGaming operators. The company was founded in 2013 and became one of the most respected names in the business in a very short period of time.

Today it creates games, offers complete solutions for iGaming operators and provides support to a large network of software providers under their wing. It is an established name that is often times seen working with top tier operators in various competitive markets.