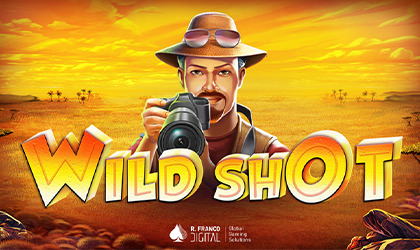 Franco Digital has developed an online slot game that is ideal for people who wish to take chances and appreciate nature's beauty. Wild Shot is a five-reel, three-row, 20-line game that allows players to explore the savannah and take beautiful photographs of the African wildlife. This game has bearable graphics and simple gameplay that is sure to keep players enthralled for hours!

Photograph African Wildlife and Get Prizes:

Howdy, explorer! Strap on your equipment and get ready for some Safari action with Wild Shot. With an RTP of 96.01% and a maximum win of 2657x the bet, this is one game you won't want to miss. Set against the backdrop of a dusty African savannah, Wild Shot features a betting range between $0.2 and $160. This title comes with medium volatility and has extra spins, scatters, wilds, and multipliers.

Commercial Director of R. Franco Digital, Mario Benito, commented: “With Wild Shot, we have created a slot experience that combines interesting game mechanics with a theme featuring the very best and wildest elements of the natural world. It is a game that features superb visuals and a fascinating theme. I am certain that with its dynamic gameplay, Wild Shot will resonate with our operator partners’ players across LatAm and MGA markets. Wild Shot is the latest addition to R. Franco Digital’s extensive games catalog, which can be enjoyed by players across Colombian, Spanish, MGA, and Curacao-licensed markets."

About the Slot Developer:

R. Franco Digital is a global gaming provider that was established in 2014. The company is part of the Recreativos Franco Group, which is a pioneer of slots. The group was launched in Spain back in 1965 and has since strengthened its position in the country. It began to expand internationally, launching machines in Norway, Sweden, France, the Netherlands, Russia, the United Kingdom, Italy, and more. It has seen a lot of success over the years and launched its digital division in 2014. This allowed the brand to develop into a group of omnichannel games that are available in Spain. It is constantly expanding and innovating, making it one of the most promising gaming providers in the world.