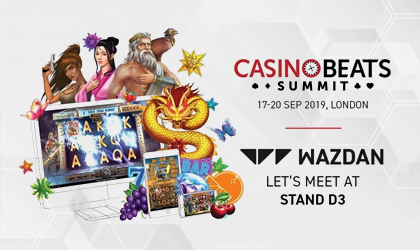 Wazdan Games, a renowned software provider, has announced a number of exciting future releases. The company is set to showcase their upcoming games…

Wazdan has once again created plenty of hype regarding games they are set to release in the near future. The company has announced its location at CasinoBeats Summit 2019…

…that is being held in the capital of the United Kingdom. Its spot will be at stand D3 at Olympia London.

The Summit will be held from September 17th to 20th and will bring together the leaders of all branches of the iGaming industry. During this time, many providers will present their games to the audience of operators, affiliated and other interested parties.

The supplier has planned out quite a show at their stand. They will be showcasing a complete range of upcoming slots that include Power of Gods: The Panthenon, Butterfly Lovers, Neon City, Relic Hunters and the Book of Faith as well as Magic Stars 9.

Furthermore, the brand will also grant visitors access to some of the already released titles from this company’s portfolio. They will showcase their game of the year title – Larry the Leprechaun as well as Dragons Lucky 8 and others.

The company has taken things one step further and will host a coffee bar for all of their visitors. Overall, they have put together quite an attractive repertoire that is…

…promising to be one of the strongest presentations at the Summit this year. Games, press and online casino operators alike are in for a treat.

Andrzej Hyla, Head of Sales at Wazdan, commented on their upcoming presentation: “We are extremely excited to be part of the CasinoBeats Summit and bring attendees a taste of some of the new titles soon to be released. The CasinoBeats Summit is a great opportunity for us to mingle with our peers, learn what is happening in the industry, and show off what we are contributing to the online gaming sector. Don’t miss the chance to pick up a coffee, and try your hand at the latest Wazdan games.”

Wazdan is a software development studio that has made a name for itself by delivering high-quality content to the iGaming industry. The company started its journey by creating backend tools for operators, only to move into slot games and for-money niche soon after. Today, they are maintaining the reputation of being a top tier provider that pushes the limits of the industry.

Aside from high-quality titles, this company is also known for their advanced in-game features. They are one of the few studios out there that allows players to fine-tune their gaming experience and approach online slots from a completely different angle.

Such advanced tools and features have brought this company rewards as well as a loyal fan base that is constantly on the lookout for new releases.

Get Fired Up with Burning Sun Slot from Wazdan