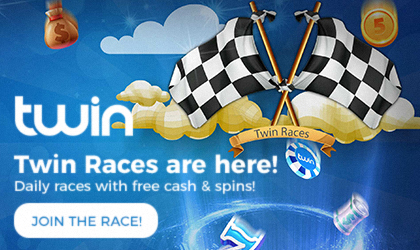 It’s hard to be creative and innovative among so many inventive operators and developers. One of those who is continuously trying to come up with something new is Twin, now with their latest game called, Twin Races.

Providing Players With Something Different:

Namely, they developed an action-packed game that represents an entirely new approach to developing slot machines by adding two leaderboards to climb simultaneously.

During the first one, users must grab a multiplier by simply landing the biggest win multiplier during the tournament. That is going to help them collect the best prize.

How does it work? For instance, if a player wagers one euro and get twenty, he will also receive a x20 multiplier score. Once that occurs, only the highest score will be documented on the leaderboard.

The second leaderboard serves for amassing points based on win size. Then points are awarded like this: from one euro to fifteen (2 points), from fifteen point one to thirty (20 points) and from thirty point one and above (100 points).

Furthermore, points are gathered during the race and players will end up in a certain spot depending on their score.

Each month, Twin will bestow their consumers with either casino spins or with an amount of money worth up to 30 thousand euros across both leaderboards.

The established operator released this game with a goal to offer something that people haven’t seen before and to further secure their reputation. They are aware of the fact that players are always yearning to see an inventive game, hence, they designed something that is both amusing and very engaging.

“We are thrilled to launch Twin Races and to provide our players with yet more excitement and thrills when playing at our casino.

We believe the innovative features we are launching continue to add significant value and keep players engaged and active at the casino for longer.”

As we stated above, this operator has already built a great reputation by mixing a modern platform with state-of-the-art technologies in order to provide consumers with a superb player experience.

They were established approximately two years ago and since then they have managed to take couple of recognitions such as Rising Star at the SBC Awards 2018.

Moreover, they grabbed the trophy for Best Affiliate Program Newcomer at the IGB Affiliate Awards and not too long ago they were accredited by online casino affiliate site, Casinomeister.

Asian Fortunes from Greentube Is Out Now