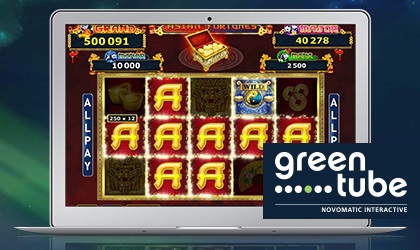 These days, the gaming market is overflowing with slots that are Panda-related. Their good-tempered behavior obviously inspires a lot of software developers. One of them is Novomatic subsidiary, Greentube that recently released an entirely new game called, Asian Fortunes!

What Does This Game Have to Offer?

Land-based casinos are already fighting over this fun title. Ever since it came out, it has become a huge hit among them. We have some good news for B2B partners – this game is now available for them.

During play, you will encounter not one, but four pandas, that are here to help you receive as much as possible. It comes with…

…several super cool features along with a good jackpot and Extra Games.

How To Get The Most Out Of It:

It’s worth mentioning that this reel slot doesn’t come up with typical win lines, meaning that the position of the icons on the reels is not important. The entire point is to land at least three matching characters starting from left to the right.

Most games are composed of Wild symbols. This one offers two of them! One is red and the other one, blue. Besides them, you will also get the opportunity to grab at least one (out of four) jackpot.

The jackpot we mentioned above could potentially be earned during the amusing Lucky Panda mini game. Twelve gongs can then be seen that could help you get it (or them). On the other hand, if the third, fourth or fifth Scatter characters are seen across the reels, you will activate the previously listed additional game.

During this round, classic symbols (such as 9,10, A,K,Q, and J) will not be seen on the reels because if that happens, you will increase your chances of getting a huge win!

Greentube has decided to incorporate a new business partner into their portfolio: Malta-based casino company, Twin. Although it is relatively new, it has already proven to be a corporation with a big potential.

“We have always prided ourselves on building a fully customer centric experience, this not only includes our user-friendly system but our game choice as well, we believe that by announcing this deal with Greentube, we have once more announced ourselves as one of the top new casinos. With our ambitious marketing strategy and continued onsite tweaks and developments, we are certain to continue this rapid rise throughout the remainder of 2018 and in to next year.”