True Lab Goes Merges the Day and Night in their Release 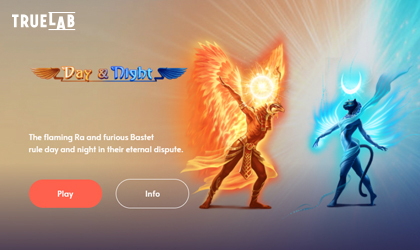 It’s not every day that you see a slot game that just transcends the standards of the industry in terms of graphics.

Sure, there are some awesome looking…

…slots out there, but they pale in comparison to Day and Night by True Lab. This is arguably one of the best-looking slots released this year.

The Eternal Fight Between Day and Night:

The company behind Startup Valley, went above and beyond with this game. If you like slots that are fun but also look impressive, this one is for you.

As the game loads up, you’re presented with a scene depicting the eternal fight between the…

…day and night. The whole theme has a strong Egyptian influence to it. On the left-hand side of the screen, you’ll notice an eagle figure that represents sun god with his wings spread and a sun above his head. The right-hand side features a cat goddess of the night with a half-moon above her head.

Both of these mythical characters are fully animated and downright packed with details that add plenty to the immersion.

Symbol design follows the main theme very closely. The lower paying tier comes in the form of card royals that are styled in to match the theme.

…set is full of various Egyptian motifs such as the eye of Ra and others. Last but not least, the soundtrack is also adding a layer of immersion.

This 6x4 slot brings a variety of interesting features that aren’t that conventional. The Dispute mechanic represents the struggle between Day and Night. The Game starts with 3 day reels and 3 night reels.

Each type of reel…

…has its own type of wilds. When Day Wilds outnumber the Night Wilds, the reels move one in favor for the day side and vice versa. There are the Day Bonus Spins and Night Bonus Spins as well, each activated when either side conquers all 6 reels.

Vasily Polynov, the developer’s CBDO, shared a comment regarding the new title: “Our first game inspired by a classic plot looks just perfect to me. Together with the great idea of Day and Night reels, this slot stirs up a lot of emotions thanks to its astonishingly well-detailed visuals and sounds, as well as a very promising math setting.”

True Lab is a software provider that specializes in building immersive slot games for the iGaming industry.

Founded in 2016, it didn’t take long for this company to lift off and become one of the most popular boutique providers on the market. The brand is run by a small team of professionals who aim to push boundaries with their artistic abilities.