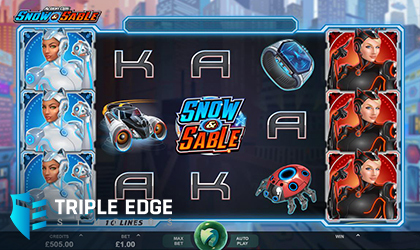 Over the past couple of months, prosperous game provider, Triple Edge Studios, have shown what they are capable of. Although they are relatively new to the industry, their massive desire to progress has made them one of the most promising companies in this field.

Approximately, two months ago, they developed the Book of Oz where their full potential and creativity were accentuated. It is time for a fresh new game and this is what they launched…

If you’re tired of static games and you are ready to get some action, then you will find it in the futuristic city of Aurora where danger is continuously lurking!

The name of this slot is called, Action Ops: Snow & Sable and it is filled with action and a plethora of possibilities to get sensational winnings!

During casino spins, you will come across two cyber agents. If you utilize them properly, they will help you grab two guaranteed full wild stacked reels on each spin!

Arm yourself strength and motivation because with them, you’ll be able to enhance your opportunities for multiple wins and 1000x your bet!

If two scatters are found across the reels, you will blast off more bonus spins and keep this adventure going.

The second day of ICE London was the most exciting for the software king, Microgaming, whom Triple Edge provides games exclusively for.

Most of us know who this fearless woman is, but it doesn’t hurt to get more information about it…

Furthermore, she embarks on a journey to explore and dig up valuable, ancient treasure. Lara has up to 243 ways to win this game and at the same time unlock many other marvelous features.

The first day of this important event was a little bit different. They spiced things up with a slot called, Village People Macho Moves, that will make you feel like you are stuck in the 70s disco era.

This one was developed by another successful company called Fortune Factory Studios and it is also full of enticing moments. We are looking forward to checking out both of these games!