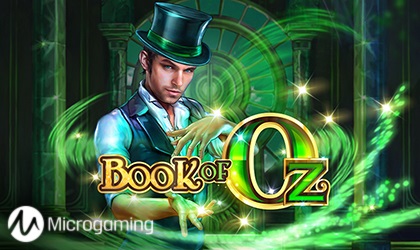 Book of Oz represents the latest release from Microgaming, a video slot that was developed by Triple Edge Studios, an innovative brand which creates content exclusively for the gaming giant. It is famous for first-rate titles like Wicked Tales: Dark Red.

What Does It Feature?

Inspired by the iconic tale of the Wizard of Oz, the title features five reels, ten pay lines and high-volatility. If we add to it an enchanting atmosphere, filled with enthralling and magical graphics, then it safe to conclude that this game is a sight for sore eyes.

Aside from these elements, this slot is going to surprise its users with scatters, wilds, bonus spins and even re-rpins!

Tripe Edge Studios expressed their creativity by designing breathtaking, artistic symbols that include the potion of love, the lion of courage, the golden book and the mystical Wizard.

Both wild and scatter characters are represented by the Wizard’s Book and they can help you get some great prizes. If you land at least three Book Scatter icons, you will activate casino spins, from ten to twenty-five, depending on the amount of these signs.

This will also enable you to potentially trigger this feature a few more times. Illuminating and symbols with high value can blast-off winning that can reward the players with up to whooping 5,000 times their initial bet in bonus spins.

To keep you on the edge of your seat, the developers added the re-spin feature to the base game. After you determine the wager, you can add more money in order to respin a single reel independently at an additional variable cost.

What Does That Mean?

If you get a winning spin of four of the same Wizard characters, you will get the opportunity to once again spin the reels and potentially land the fifth icon of the same type. This game allows the users to make their own strategy that is going to help them get even better results and outcome.

“Book of Oz is another fantastic creation by Triple Edge Studios enriched with magical artistry and packed with rich game mechanics. Players can listen to an intriguing soundtrack while immersing themselves in the game to uncover an enthralling storyline as they play. The Re-Spin feature adds a new dynamic twist to the overall gameplay, enhancing the level of engagement and it combines extremely well with the win potential in the game, where players can win up to 5,000 times their bet.”

“We are extremely excited to release Book of Oz, our fifth game this year under the Triple Edge Studios brand. This has been the most fun we’ve had developing a game and the Re-spin feature is a brilliantly fun addition. Bespoke hand-painted art was created to help tell our fantastical tale. Infused with fantasy and adventure, Book of Oz will leave players spellbound. Stay tuned for more exciting games from us in the future, which we will be supplying exclusively for Microgaming.”