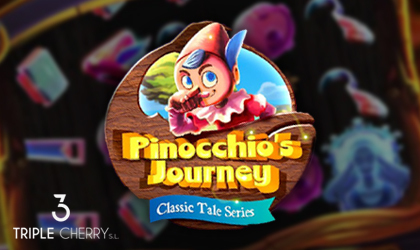 Spanish-based slot developer, Triple Cherry, is pleased to announce its gaming portfolio called Pinocchio’s Journey. The title is based on a classic fairy tale where a living wooden puppet became a real boy, which was created by Geppetto.

The 5-reel, 3-row game has 25 active paylines. This is a medium to high volatility game where players can bet from $0.3 up to $20 and an RTP is 95.41% which is slightly below the industry average. As they play, users will need to collect bonus symbols to load the progress bar and trigger extra spins. Also, players can buy extra spins right away thanks to the Buy Bonus feature. There are special shadow symbols in the free game that award additional spins. This game is designed with stunning graphics and backgrounds in order to entertain and keep players more engaged. This is the first slot launched by the brand this year and it promises many more in the future.

Juan Antonio Galindo, CEO & Co-Founder of Triple Cherry, commented: ”We wanted to develop a slot with a theme that everybody knows. The tale of Pinocchio is a beautiful childhood story which people from all over the world know about.”

With game studios located in Spain in the city of Valencia, Triple Cherry operates mostly in the markets of America and Europe. It has been around since 2018 and since then, has released several quality games over the years with a focus on slots. To stand out in a very competitive casino industry as an online casino developer can be tricky, but the supplier’s stunning design is obviously allowing it to stand out and it is already a popular choice for players. The company follows latest technologies, and its games are available on all major platforms and devices. It established important partnerships with leading brands in the industry and is really hard to achieve what this company did for few years. As the developer grows and releases more games, it is sure to attract many loyal players.