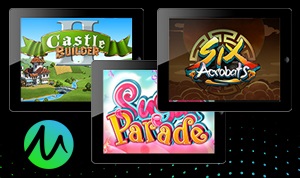 July is proving to be a big month for software giant, Microgaming. The brand has announced the release of three new slot titles, scheduled to go live this month, two of which are already available for play. The three new titles are as follows: Six Acrobats, Sugar Parade, and Castle Builder II. All but the latter were launched this past Thursday, July 6th.

The brand’s games publisher, David Reynolds, commented on the releases: “Once again we are delivering a real mix of games to the market, distributing titles that will appeal to different audiences.”

Sugar Parade was the first to go live, and players trying it out for the first time, can look forward to a layout of 5 reels and 15 paylines. The game is also equipped with enticing features, including a series of free spins, and multipliers up to 3x! A bonus round may also be triggered, with guaranteed wins up for grabs. Much like the name implies, the title offers a syrupy theme, topped off with decadent frosting, and other sugary sweetness.

Six Acrobats launched alongside the previous title. As users spin the reels, they are sure to get their fill of impressive acrobatic acts, executed beautifully. The game is made up of 5 reels and 9 paylines. It also boasts multipliers up to 25x when free spins are initiated.

While two titles have already been released, the third and final title scheduled for a July unveiling is Castle Builder II. Players can take this sequel to Castle Builder for a test drive, beginning July 19th. Offering up 5 reels, and 15 paylines, the title delivers chances for players to rack up trophies and jackpot prizes, while also allowing up to 75 castles to be built during play.