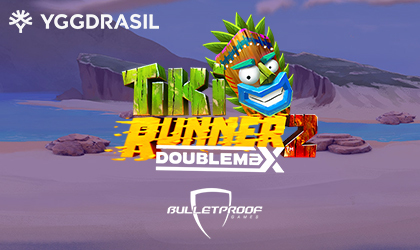 Tiki Runner 2 DoubleMax is the sequel to Tiki Runner, released in 2020 by Bulletproof Games. It's no surprise why they went with the original Tiki Runner to develop an essentially Raptor Doublemax and they included this time progressive multiplier system, and suddenly the whole game puts excitement on another level. The title is played on 5 reels, 3 rows, and 20 active paylines. Players should expect a bumpy ride due to high volatility, however, this slot offers a solid potential win of 20,000x the bet. The game's best odds are 95.50%. There are wilds, cascading wins, multipliers, encore mode, a bonus hit rate, extra spins, and a bonus buy feature.

The release is powered by GATI, Yggdrasil's cutting-edge technology that allows partners to use the preconfigured, regulation-ready, standardized development toolkit to create consistently outstanding content that is then quickly distributed!

Stuart McCarthy, Yggdrasil’s Head of Product & Programs, said: “We can always rely on Bulletproof Games to produce new online slots that are not only highly engaging and fun to play, but visually stunning as well.”

Michael Bullock, Product Director at Bulletproof Games, added: “We’re thrilled to unleash this slot upon the world, as players absolutely loved everything the first Tiki Runner slot had to offer. We’re absolutely certain that everyone will enjoy this release even more so, especially considering we’ve filled it with more unforgettable bonus features and mechanics.”

Yggdrasil is a name and logo chosen by the online casino provider to reflect Old Norse mythology. This brand provides epic and interesting titles. In just a few years, it has achieved a lot, despite having its first license and not being the industry's top choice. In 2014, the company launched the iSense platform, which enables total game customization in new versions of mobile and desktop games. In 2015, the team developed the Boost promotion tool, and later the following year introduced the social media tool Brag, which allows players to celebrate important victories with friends. The company has worked hard over the years to build a reputation, and has been recognized for its innovative content and the company won a prestigious award for Innovator of the Year in 2019, 2018, and 2017 at the International Gaming Awards.

Win Big With The Big Atlantis Frenzy Developed By BGaming