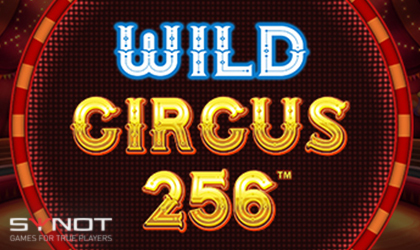 The Circus is one of those old forms of entertainment that has somehow survived everything from the industrial revolution onwards. SYNOT Games’ new title, Wild Circus 256, takes full advantage of this theme.

The studio behind this title hit all the right buttons with the theme, gameplay and overall aesthetic. It appeals to the nostalgia and those who appreciate a more traditional slot experience.

The Circus Is in Town:

SYNOT’s latest release is one of those slots that is obviously meant to draw the player in with its gameplay rather than its looks. With that said, the game has the whole aesthetic aspect covered completely.

The title is based around circuses at its core. To be more specific, the background depicts the circus while the frame and the rest of the details aren’t all that niche. Instead, SYNOT Games went with a theme that has a very classic feel to it. Most of the icons and design solutions look like they were borrowed from vintage machines.

Looks aside, the real star of this show is the base game. The developer chose a 4x4 grid based on a 256 ways to win system. As far as special features go, the game comes with a fairly unique one. Aside from the main reel grid, there is also a Circus Wheel mounted on top of the reels. As the player spins the reels, the wheel in question also spins.

Depending on one’s luck, the wheel can bring impressive rewards and completely change the player’s experience. Still, that is not the full scope of what this game has to offer.

There is also a Mystery Symbol that randomly appears on the reels that can potentially award the player with 100x the payout. Needless to say, the game keeps things interesting. It is most likely going to be one of the more efficient titles this in terms of player retention.

Matej Sopoci, Chief Product Officer at SYNOT, offered his comments regarding this newest addition to their portfolio: “The most unique feature of this game is the Circus Wheel, used for the very first time in our slots. The players will sure love the anticipation of the random selection of Wilds and the game’s joyful vibe.”

Wild Circus 256 will be available in select online casinos partnered with the brand.

SYNOT is a multinational company that has been in the iGaming business for a while. They are mainly operating out of Eastern Europe, with a great team of dedicated individuals running their day to day operations. Over the years, the company has grown into a full-blown holding with numerous businesses under its wing, some of which have nothing to do with iGaming.