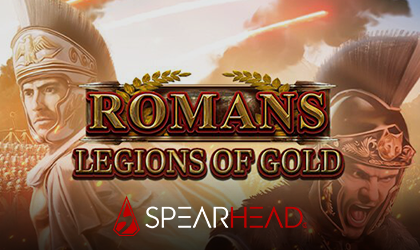 Spearhead Studios, an online casino provider presents its video slot Romans Legions of Gold. The action takes place in Ancient Rome and this title brings a unique gaming experience. The game uses an unusual reel system that varies in and has many interesting features, which are available to players across 20,160 active paylines. As for betting options, players can start with a minimum wager of $0.25 while the maximum betting option is $100. This is a high volatility game that has an RTP of 95.80%, which is below the average. Scatter symbols launch extra spins where the 2 highest paying symbols gradually become wilds on each reel at the same time. Players who re-run the extra spins will have a magnificent victory as extraordinary as the powerful soldiers of Rome.

This brand announced two new major partnerships with renowned operator Bethard and industry leader Betsson Group and this brand already employs over 100 operators and they are aiming for accelerated expansion in 2021, with plans to launch 40 games. By producing local games for local markets, the developer is licensed to deliver its content to Latin America and Europe, including the competitive markets in the United Kingdom and the United States.

The relatively young casino provider continues to attract more players with its great titles and besides slots, it puts massive effort into developing other popular casino content!

Kevin Corti, Game Development Director at Spearhead Studios, added: “Romans – Legion of Gold is the third title of the Spring, after the sequel to our blockbuster Lara Jones is Cleopatra II and Wild Gold. I am positive that players will enjoy the many features we have created for their entertainment. While we continue to produce high-quality slots, we are also working on other types of games, such as Poker and Bingo, which are set to be released this year. Overall, 2021 is packed with fantastic new games.”

A Product of EveryMatrix:

Spearhead Studios is one of the newest game providers which was developed by EveryMatrix. The Every Matrix managers expect the brand will expand the business into the broader field of online casino game development in the future. The gaming studio is made up of a large team of talented and trained individuals and industry experts who previously worked for the Gaming Innovation Group. The company is headquartered in Spain and is led by industry expert Mathias Larsson, who previously worked at GIG as CEO.