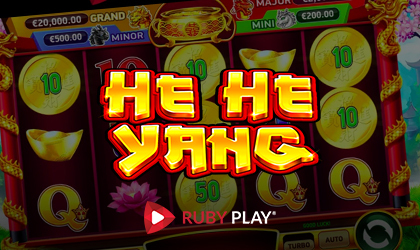 RubyPlay has revealed the launch of its new Chinese-style He He Yang slot. As they travel to China, players can look forward to peace, stability and prosperity in this addicting slot filled with ancient treasures such as Jiaoqian gold coins, symbols of fortune and more.

The game has a grid of 5 reels, 3 rows, and 50 active paylines. The RTP is 96.86%, which can be considered quite high while volatility is classified as medium to high. Players can customize their process: choose the maximum single bet, autoplay mode which is a standard set of functions. Also, the creators have planned two bonus games, Sunlight Spins and Jackpot Pick, which happen at the same time.

When 6 or more gold coins spawn, the Sunlight Spins hold and spin feature is activated with great rewards. Getting three or more scatter symbols will activate the free games bonus feature with extra wilds for even more payouts, or perhaps the Sunlight Spins feature. In addition, to further increase winnings, the wilds offer the opportunity to play the Jackpot Pick bonus.

Inspiration from the Far East:

“Everyone knows the prominence of Greek and Norse mythology in slot themes, particularly by the European game developers, but we felt that Chinese ancient mythology was maybe a little under represented. This inspiration from the Far East has culminated in He He Yang. As usual the game has a very land-based slot feel, and we’re confident people will enjoy playing it.”

Ukrainian developer with offices in Kyiv, RubyPlay, is an online provider that has launched a series of slots. Its games often have a distinct Asian theme and a common art style that sets each slot apart from the competition.

The company's website says that their slot games are created by users for the players, meaning that the company is fully focused on customer experience. Its team has over 2 decades of experience and includes various developers, artists and designers. Only the best and most talented people are involved in the invention of the brand’s lobby of games. All titles are based on HTML5 technology, making them easy to work into existing casino platforms. It also means their slots are mobile-friendly with fast loading and stability built-in.