Relax Gaming Takes Over the Dance Floor in Mega Flip 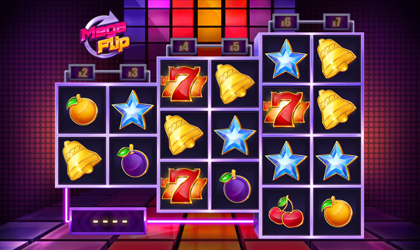 Relax Gaming has announced the release of a brand-new game titled Mega Flip.

…aesthetics. Fans of the genre are in for a treat that includes interesting features and potentially lucrative gameplay!

Bringing the Dance Floor to Life:

The developer is known for building all kinds of immersive games. However, this company sometimes releases a slot that is all about those classic vibes.

…to this category of games- sort of. The supplier did go for a classic vibe but in a completely unusual yet modern package. The new release is one of those games where the entire theme is there to give some contrast to what’s happening on the reels.

The title features a dancefloor theme that combines all kinds of vivid colors to give players are great visual experience.

Speaking of the reels, symbol design for this game is what gives it the most of its classic vibe. The brand’s development team decided to use the classic icon. As a result, the game is full of all kinds of fruits, bells, stars, lucky sevens, and more.

This latest release is an unusual game in the sense that it doesn’t feature your standard reels. Instead, the first two reels have 4 rows, the next two feature 3 rows while the last two feature 2 rows. This configuration allows for some pretty interesting base game mechanics. That being said, there’s plenty of features to spice things up even further.

The developer has incorporated a re-spin feature where all winning symbols are locked and the remaining reels spin.

Additionally, while this feature lasts the multiplier meter goes active, potentially yielding up to x7 multipliers.

Then there’s the classic Bonus Spin mode that yields up to 8 bonus spins with the ability to add 2 more while this feature is active.

It’s also worth mentioning that the reels are flipped…

…while this feature is active, thus giving players a different view of the game. Simon Hammon, CPO for the brand, said: “Mega Flip combines traditional symbols with contemporary features to deliver riveting gameplay that will leave lucky players feeling like champions of the dancefloor. With the number of Respins and Multipliers on offer, this high-volatility slot provides huge payout potential while keeping players engaged with unique mechanics and a colorful retro theme.”

Relax Gaming is one of the leading software providers. The company is specialized in producing high-end slots for the iGaming industry. So far, it has established a massive portfolio which it delivers to a wide range of partners within the industry. The company has a presence in every key regulated market, servicing thousands of players worldwide.