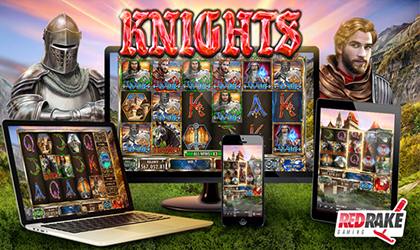 Every girl dreams of knight in shining armor and, generally speaking, when we think of them, it is always in a heroic and romantic context.

Albeit this game doesn’t showcase any love story, it talks about brave men and things they would do to accomplish their goals.

One of the most creative developers in the industry, Red Rake Gaming, has just launched a slot called, Knights.

It consists of a 5x3 reel set and brings along another one that’s magical. The entire story is set in the Kingdom of Camelot, a very exciting place where numerous battles have occurred.

Now, in this game, they are not only going to be courageous, but also very generous towards any player who shows the will to earn a lot, especially during the casino spins feature.

Surely one of the most interesting features of this video slot is the additional sixth Magic reel. Gamers can choose whether they want to activate it or not during the normal feature.

If they decide to trigger it, then they will have more chances to complete their wins. The wild character comes in the shape of popular Merlin and can multiply the win that was acquired in the winning lines in which it shows.

What About Other Symbols?

Players will come across the horse character that can bestow them with up to forty slot spins!

It represents the starter to the extra feature, in addition to its scatter prize. If it is seen more than two times during this feature, it will reward players with more extra spins, along with its win while it still appears.

Moreover, during this feature, the gamer could potentially multiply his winnings with x2 and x3 multipliers.

The culmination happens during the casino spins feature when the three knights slowly become wilds as the shields are activated shown in the upper part of the reels. Moreover, the color of the shield must match the color of the knight.

It doesn’t matter whether you are a fan of these types of slots or not, generally speaking, this is an exciting game filled with tense and thrilling moments where reels are extremely magnanimous towards anyone who embarks on this virtual journey.

Their latest game tested our ethics and moral values, while this one wants to see how brave and fearless players really are.