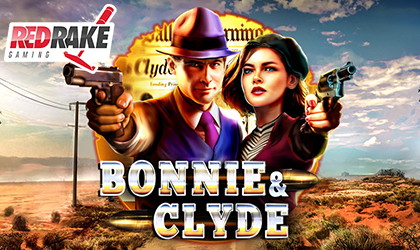 We’ve already talked about the egregious couple Bonnie and Clyde in one of our previous articles when BF Games launched a game about them. This time, someone else thought about dedicating a slot to these two and took an entirely different approach. Who was that?

Show Your Dark Side:

It’s one of the leading game developers, Red Rake Gaming, that has come up with this idea. They are taking transporting the players to the United States in the 30s where crime was on the rise.

Those who are yearning to have a life-on-the-edge experience will embrace this story in a matter of seconds.

Furthermore, they will also see how it feels to be one of the most-wanted fugitives of all time, continuously on the run.

Features To Spice Things Up:

You can’t have an action-packed game without exciting features. That’s simply impossible, hence, Red Rake added a couple of thrilling things to jam things up.

Perhaps, one of the most enticing parts of it is grabbing rewards with Clyde. The infamous criminal pays in both directions and his “better half” gives additional casino spins!

Moreover, she is the main reason why players have the possibility to activate the extra spins feature.

If Bonnie is seen three, four or five times, users will play this feature with ten, twenty or fifty spins, and will also have the opportunity to enhance these amounts if her icon is seen with a certain number.

As you have probably assumed, this game is filled with tension, buzz, a little bit of drama, and a plethora of rewards.

A constant chase, robberies, police and other thrilling moments will keep you on the edge of your seat. A segment that certainly adds to the overall story is a sensational, top-notch design that is going to make you feel like you are literally there.

This duo has entered history a long time ago, and this game perfectly illustrates their cruelty and viciousness. Are you ready for it?