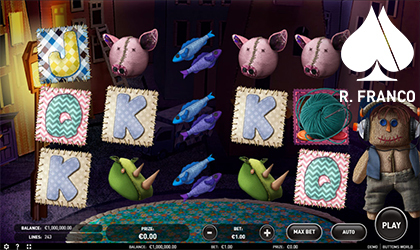 R. Franco invites players to the world of special toys with the online slot Buttoms World. Across the reels, there are different toys with knitted eyes. The theme of the game is quite captivating and is unique in the world of slots. As for the features of the game, there are wilds, scatters, and extra spins.

There are 5 reels, 3 rows, and 243 active paylines in this fantasy world filled with knitted dolls. It follows the adventures of protagonist, Buttom and his friends. The game has an RTP of 96.06%. Players can significantly boost winnings with wilds and 3 telephone scatter symbols trigger 10 extra spins. The title has a great user interface, and is adjusted to work on any device including mobile and tablets, which allows players to take an exciting and pleasant journey in this interesting fantasy world.

This is the first in a series of attractive games launched by R. Franco Digital as the developer continues to strengthen its position and to offer games in regulated markets around the world!

Mario Benito, R. Franco Chief Commercial Officer, said: “Our talented team has come up trumps again with Buttom’s World, one of the most elegant slots we have produced. It is already proving popular across our global markets and the release paves the way for further fantastic titles we have lined up for release over the coming months.”

R. Franco Digital is an online casino provider founded in 2014. The company is part of Grupo Recreativos Franco, a pioneer of slot machines, established in Spain in 1965. The company established its position across Spain and began to increase its international presence, placing its slots across various European markets in Norway, France, Sweden, the Netherlands, Russia, the United Kingdom, Italy, and other regulated markets. It owned 50% of the shares of Codere, which later changed its name to Grupo Codere. At that time, it created R. Franco América and was providing content in almost every country in Latin America. While the parent company still produces arcade and bingo games, as well as a full line of slots and electronic roulette, the digital department is currently focused on online gaming and land-based services.