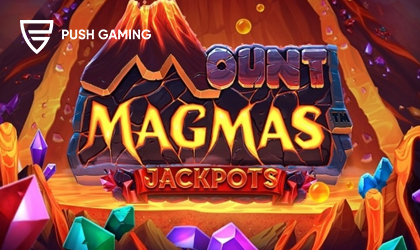 Mount Magmas is an online slot created by Push Gaming and takes players on an adventure amid volcanos. This title is exclusively developed for LeoVegas. The game brings excitement between erupted volcanos with hot lava, and there is an exciting opportunity for players to generate wins.

The title is played on a 5x5 grid and there are 20 active paylines. The heavy soundtrack adds excitement too, creating a Mordor-style scene from Lord of the Rings, of course, without the orcs and the eye of Sauron. The game is available on any device with an internet connection and enables players to bet between $0.1 and $100 per spin. With a higher bet, there is a higher chance to generate a jackpot, and the maximum potential win is 20000x the bet. The RTP is 96.50%. At least 3 matching symbols generate a win, and players will be looking for the Lava Wild symbol which also replaces any symbol except the Magma Rock icon.

Mount Magmas is the latest game of LeoVegas Originals offering and is the first title that came from a partnership with Push Gaming. The slot provider has truly established itself as one of the most attractive studios in the industry and LeoVegas is pleased with the fact that this game is developed exclusively for players on its platform!

CEO at Push Gaming, James Marshall said: “Mount Magmas is another great production offering huge win potential and we’re delighted to be launching it exclusively with a market leader and valued partner in LeoVegas. This is also a significant milestone for Push Gaming, with the title being our first Jackpot game, combined with it offering must-drop and timed Jackpots. We’re looking forward to building on this in future releases.”

Push Gaming is a casino software provider that develops games for many casinos around the world. The company operates from offices in the United Kingdom and this brand is committed to taking the slot machine industry to the next level by developing high-quality products. The company was founded in 2010 and it launched popular games like Blaze of Ra and Jammin Jars, which are licensed in the Alderney and the United Kingdom. The brand has a constantly expanding gaming lobby filled with content fully optimized for tablets and mobile devices. The company received an award for the best high volatility game Jammin Jars.