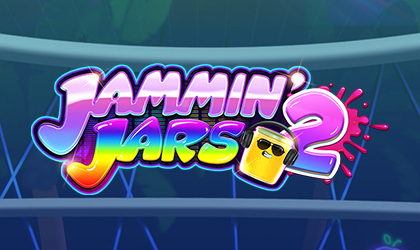 The original Jammin' Jars was a huge hit and its sequel, Jammin' Jars 2, is sure to be a smash as well. In this latest title, players are able to enjoy a colorful and fruity atmosphere. The developer managed to find the right balance and Push Gaming added more than enough new features that will see players more engaged.

The jazzy-style soundtrack is perfect for enjoying exotic cocktails. Players are invited to generate wins across 8 reels and 8 rows, where the maximum potential win is 50,000x the bet. Like in its predecessor, there is a cluster payout system. The minimum betting option is $0.1, while a maximum betting option is $100. The game has an RTP that goes up to 96.40%.

Freshening up a Fan Favorite:

This game follows recently released titles such as Land of Zenith and Dinopolis and is the latest to highlight Push Gaming's game design. The gaming provider celebrated its 10th anniversary last October and continues its development this year after acquiring licenses from Malta and United Kingdom gambling authorities!

James Marshall, Push CEO, commented: “Everyone’s favourite game is back and it’s groovier than ever! The first was one of our biggest hits and we’re sure players will be delighted to see its sequel. We’ve taken everything that was great about the original and cranked it up to eleven. We’re confident fans won’t be disappointed!”

Push Gaming is a popular online casino software brand with an ever-growing library of games that only includes premium online content that is fully customizable for desktop and mobile devices. The company was established in 2010, thanks to James Marshall and Winston Lee. It has headquarters in the UK and is focused on the production of HTML5 online slots, as well as slots for land-based casinos. The developer’s first branded games appeared in the industry in 2011 and were licensed by the Gala Coral Group. In 2012, it formed important partnerships with some of the biggest names in the industry such as Microgaming, Playtech, and OpenBet. Thanks to these agreements, the company was able to expand its influence significantly in the following months, which resulted in attracting more and more online casino players.