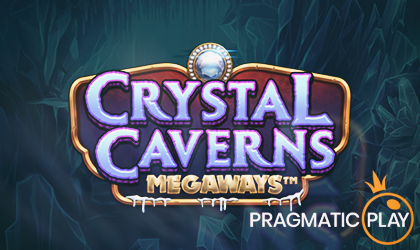 Pragmatic Play brings another Megaways slot called Crystal Caverns Megaways. The reels are set in an icy cave where valuable gemstones can be found. In terms of symbols, Crystal Caverns Megaways is based on a mixture of royals and gems. Five classic royals are there 10, J, Q, K and A, which pay less, however, players will be looking for premium symbols such as orange, yellow, pink, green, and purple precious stones.

What Players Can Expect from This Release:

Crystal Caverns Megaways comes with a big grid of 6 reels and 7 rows, and thanks to Megaways, 117,649 active paylines. Players should expect less frequent payouts as this title has high volatility, however, the maximum potential win of 10,000x the bet is worth it. The highest RTP is 96.46%, which is above the industry average. Players can test the game in demo version, while for real money action, the minimum required wager option is $0.2, and the maximum betting option is $100. There are wilds, multipliers, tumble mechanic, an expanding wilds feature, extra spins, and a bonus buy option.

Ending the Year with One of The Best Slot Games:

Julian Jarvis, Chief Executive Officer, stated: “Crystal Caverns Megaways™ pairs high-volatility excitement with glorious visuals in an experience that will have players on the edge of their seats. We are delighted to be able to round off what has been a hugely successful year with one of our strongest slot titles, and cannot wait to see how players react to the unique gameplay.”

Pragmatic Play was founded in 2013 and the important part of their success was joining the Novomatic group in 2014, as well as providing access to their portfolio through third-party operators such as Greentube. Initially targeting the Asian market, they moved to the UK in early 2015 and opened their offices in London. The brand offers more than 300 casino games with a variety of innovative themes, each of which is compatible with HTML 5 technology. All of the provider's games are available on various platforms and devices, which means that their games are adapted for all devices.