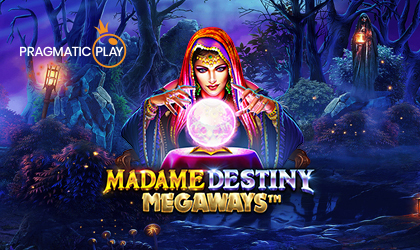 Pragmatic Play, an online casino provider, launched a 6-reel, 5-row online video slot Madame Slot Megaways with 200,704 active paylines. In the mystical kingdom of Madame Destiny is an amusing soundtrack with delightful graphics creates a tense atmosphere as players seek out wealth. Three or more scatter symbols activate the extra spins feature, in which players will meet a spinning wheel, which gives extra spins and the starting multiplier for the bonus round. The new release also includes the option of buying a bonus feature in some jurisdictions.

The latest release from the developer follows the recent successes of Congo Cash and Emerald King Rainbow Road among a vast library of provider’s slots with unique content designed for players from different countries and cultures. The maximum potential win of 5,000 the bet and betting range between $0.2 and $100 is decent, but it is obvious that players can profit much better in these kinds of games, particularly because of the RTP, which is 96.56% and high volatility and considering the fact that some of the valuable features are available such as extra spins with multipliers, wilds and Tumbling Reels.

Yossi Barzely, Pragmatic’s Chief Business Development Officer said: “Madame Destiny Megaways takes one of our most exciting titles and reinvents it, adding new features, Megaways and more as players enjoy the next instalment in the Madame’s mystical world. Our portfolio continues to grow in diverse ways and upgrading our existing content has allowed us to reach more players and generate engaging gaming experiences.”

Pragmatic Play was founded in 2015 as an online business by a group of professionals with extensive experience in the online gambling industry. When this brand started providing software for casino sites, there was only one downloadable game available to players and the only language was English. Later, as more countries were accepting its games over the years, they were involving more languages. Progressively, it began to license its games for use on different sites and they were mixing games from different manufacturers and improving language support with the ability to play in multiple currencies. Later, its software was finally available on all platforms, and today their games are also available on mobile devices too.