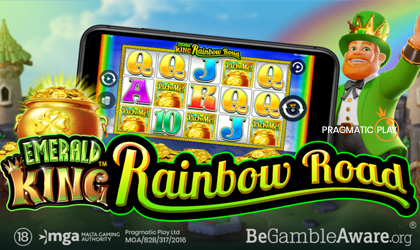 Pragmatic Play and Reel Kingdom have together launched Emerald King Rainbow Road, a brand-new slot, which follows the footsteps of the recently launched Emerald King slot, where the players will meet again with the generous Emerald King. The action takes place on 5 reels, 3 rows and 20 active paylines. Players can bet between $0.2 and $100. This is a high-volatility game and players sometimes need to be patient and wait for big wins, and the maximum potential win is 20,000x the bet. The RTP of the game is 96.71% plus there are a lot of interesting features that help players to increase their chances of winning.

The lowest-paid symbols are classic royal king symbols A, K, Q, J and 10 while The Emerald King Rainbow Road itself is the highest paid symbol. The wild symbol represents lucky four-leaf clover with wild text attached to it. There are two different scatter symbols: one with the image of the Emerald King and the other shows the image of a pot of gold. When players trigger the Emerald King mini-slot game bonus, players will participate with symbols that show the number seven in red, blue and yellow color.

Yossi Barzely, Pragmatic Play Chief Business Development Officer said: “Our partnership with Reel Kingdom is an incredibly exciting and rewarding one and we’re delighted to release a smash sequel, Emerald King Rainbow Road. Jam-packed with features and the chances of winning a staggering 20,000x your stake, player’s will be hoping for a fruitful trip down the Rainbow Road.”

Pragmatic Play was established in 2015 and has grown to become one of the most renowned suppliers in the world. It offers various casino games such as slots, video poker, live dealer games, table games and scratch cards. The provider has released over 180 online games, including live casino games like roulette, blackjack, baccarat and bingo. The exciting games created by the provider are available for different platforms, which means that all players who are using mobile or desktop devices, can enjoy the game. Its game lobby has titles such as Wolf Gold, Dance Party, Buffalo King, Master Joker and more. The company operates under licenses in Gibraltar, Malta, Romania, Curacao, and the Bahamas.