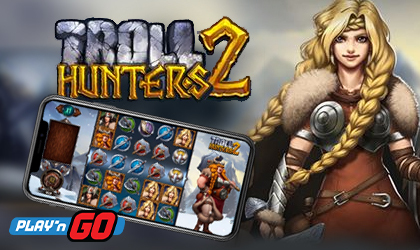 Play’n GO has announced the release of a brand-new slot game titled Troll Hunters 2. The game brings a lot of the features that have made the original so popular with the addition of several innovations.

Fans of the original are in for a treat with this latest release!

Hunting for Trolls, Round 2:

The popular supplier is known for its many awesome games. However, this series has got to be one of the more successful releases this company is responsible for.

Now, seven years after the original…

…was released, we’re getting a sequel and it looks like it’s worthy of its name. The game brings a classic Nordic aesthetic. As it loads up, players are transported into a snowy mountain range somewhere up north, with green pine trees being the only no- gray or white thing in the entire background.

Up front, we have a Viking warrior sitting on the right-hand side of the reels, while the left-hand side is reserved for the wilds meter. Symbol design comes in the form of a tiered system. The lower paying tier consists of various weapons such as swords and axes. The higher paying tier is all about the main protagonists of this story.

As far as features go, the sequel offers the Multiplier Wilds feature that is triggered once the multiplier meter is packed full. Then there’s the Bonus Spin mode with possible 2x2 multiplier wilds.

…is packed with potentially lucrative opportunities for those who are lucky enough to trigger them! Overall, players stand to win up to 5000x their bet.

Martin Zettergren, CPO of Play’n GO, offered his comment on the new release: “There are many factors to consider when creating a sequel, or adding to a series of games. While you want to capture the familiarity of the original and keep the elements that made it successful in the first place, you can’t simply retread old ground and expect the same results. We’ve always maintained that we only revisit titles when we feel we can bring a new dimension to what’s gone before, and Troll Hunters 2 is a perfect example.”

Play’n GO is one of the leading software providers in the iGaming industry. The company cooperates with a number of top tier online casino operators, offering their entire portfolio of slots to masses worldwide. This provider is known for innovative features as well as robust math models.

The team behind the brand is full of talented and professional experts whose main goal is to bring entertainment to players all over the world.