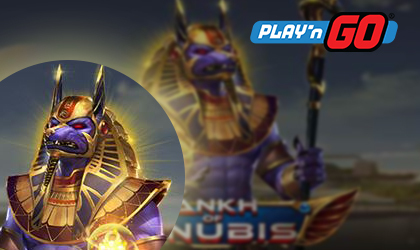 The forward-thinking game developer, Play’n GO, added new Egyptian-themed title to their already well-equipped catalog. The Ankh of Anubis took inspiration from one of the richest cultures and mythologies and brought quite an intriguing gameplay.

The studio’s catalog is among the most diverse ones in the industry and optimized to cater to the needs of the versatile audience. The content is delivered across numerous channels and available in the mobile version as well.

Seeking inspirational elements in Egyptian mythology, the main character of the game is the god of death, Anubis. However, the timeline is slightly alternated, as it introduces the kingdom where he ruled over the ancient Egyptian world for centuries, but this time creating a universe of significant technological advancement and prosperity.

… the game has 576 payways, paying left to right. There’s also a wild symbol (Anubis), a scatter symbol (Pyramid), the Ankh and other treasures playing the roles of the high-paying symbols, and royals as the LP symbols. The Wild symbol replaces any other symbol, excluding the scatter symbol to increase the chances for winning combinations.

As a small reminder:

This is the second diamond grid slot that the studio has developed. The pioneering one was Mermaid’s Diamond, equipped with more than 700 payways rather than paylines.

Since Egypt is one of the most commonly used topics for the slot, it’s of vital importance to find some way to breathe new life into the topic. This leading developer always puts plenty of effort to come up with fresh ideas that could give some innovative perspective to the run-of-the-mill subject.

As far as CEO Johan Törnqvist pointed out:

“Each time we create a game with a theme we have used before we ensure that we improve by adding something new or upgrading what was done before. “

“Ankh of Anubis is a perfect example; we switched the focus of the game, used a new format for the grid and came up with a creative free spin feature, and players are going to enjoy seeing their favorite theme done in a new way.”

The topic seems to be more than highly-motivating for slot specialists, as their catalog features more than one game with this thematic. The hit title Legacy of Egypt…

… brings a whole pantheon of deities and a rich collection of features, while Doom of Egypt , situated inside the burial chamber of the Pharaoh comes with a solid volatility of 96.2%.

In case you are a fan of even darker Egypt-related scenarios, there’s also a Rise of Dead, which introduces you with three powerful Egyptian Pharaohs Ramses, Thutmose and Amenhotep, and a whole selection of rewarding options.