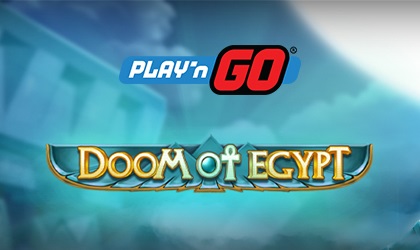 Play’n GO has announced the release of its latest title inspired by Ancient Egypt. Titled Doom of Egypt, it is apparent that this game…

…adds a slightly different spin to the whole Egyptian theme compared to most other similar games out there.

The Temple of Secrets:

The supplier has used its well-known graphic design skills to bring to life a slot whose storyline makes for a great horror.

Whereas most other Egypt inspired slots tend to be focused on specific historical characters, the title is all about the undead. Players who dare explore the temples of the unknown pharaoh will run into undead rulers of Ancient Egypt, their eternal guards and more. Fans of the horror genre and spooky slots will absolutely appreciate the level of detail that went into this game.

Adding to the whole vibe is a cold blue color scheme that can be found in every visual aspect of this slot. The only areas that give it any contrast are the gold-lined reel frame as well as the symbols themselves.

The background is animated and depicts a temple at night. The mist, swaying plants and overall sense of suspense generated by the background gives this game depth.

Attractive Features Underneath the Horror:

At its core, this is a 5x3 reel slot that runs on 10 fixed paylines. One interesting detail regarding the paylines is the animation that is triggered once…

With that said, the game comes with a few special features. There’s the standard Bonus Spin mode, a Gamble Mini-Game as well as an Expanding Symbol feature that cover entire reels if drawn during the bonus spin mode.

Johan Törnqvist, Play’n GO CEO, offered his input regarding the title: “Honey Rush and Doom of Egypt are two great games that we knew the market would react to. Rather than rushing out a game at this time of year for the quick holiday win, we’re putting more durable, longer-lasting titles out into the market that will do just as well and have a longer shelf life. There’s a place for themed games and always will be, but we’re not going to force it. If we come up with a great game for the holiday, we’ll put it out, but we have plenty of titles that everyone will love no matter what time of year!”

The game is available through the brand's network of affiliated online casinos.

Play’n GO is well-known slot game specialist that offers some of the most successful games in the industry. Aside from their gaming content, this company…

…also offers various backend solutions designed to help operators manage their content. The company is run by a team of talented professionals who know how the market breathes.