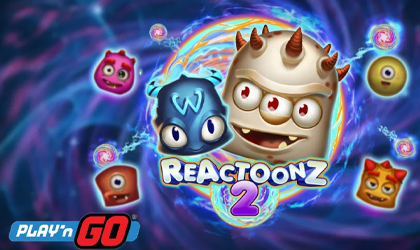 Slot expert, Play’n GO, has launched Reactoonz 2, and that could be their most notable release of 2020. The new game promises to be more attractive and exciting than its predecessor.

The title was developed by combining the cascading slot format with a special style. After publishing the new design and witnessing great success with the provider's earlier titles such as Moon Princess, Gemix, Viking Runecraft, and the creators wanted to offer operators additional gridslots for players to enjoy.

For the record, the original title was in the top 10 most popular slots around the globe and is one of the most played games in countries like Japan, Germany and the United Kingdom. The new game has a great challenge in front to justify the glory of the original one.

Like the previous title, the slot comes with a 7x7 grid with a maximum payout of 5083x the bet. The game's volatility is high, so punters need to keep in mind betting wiser to survive in the long run. The betting range is pretty wide and starts from a minimum bet of $0.2 up to a maximum of $100, so it will fit all kinds of players. The RTP of 96.2% is about average.

The game's main feature is electric Wilds and they have the potential to destroy the whole grid for new wins. Other features include a Fluctometer and Quantumeter, which helps players generate more wins.

Johan Törnqvist, CEO said: "The market has been asking for another Reactoonz title for a considerable amount of time, and we felt the time was right to bring it to life. It’s important to give operators and players what they want, but you have to ensure it’s of the highest quality. The reactions to the title have already been overwhelmingly positive; the Reactoonz are back, and everybody is excited!”

Play’n Go has proved, with experience over 20 years, to be a leading developer and expert in products created for gaming on online casinos and mobile devices such as tablets and smartphones. They have more than 100 games and 300 jackpots in more than 30 different countries around the world. The Swedish developer has licenses in Alderney, Belgium, Malta, Denmark and the UK.