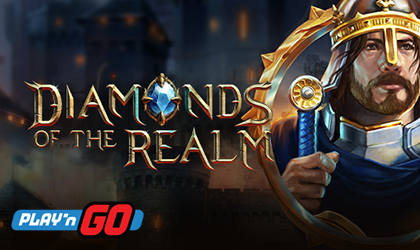 Swedish-based provider, Play’n GO, has launched Diamonds of the Realm, inspired by the tale of King Arthur. The game setting takes place at Camelot and features key characters like Guinevere, King Arthur, Morgan, and Mordred. Players will see a dark side of Camelot, with plenty of opportunities to rake in the cash.

As always, Play’n GO has made sure that this one offers plenty of modern and innovative features, and players will generate payouts with the help of wilds, multipliers up to 100x, scatters, and extra spins. This is the latest game from the brand, which follows up recent hits such as ZZ Top Roadside Riches, Odin Protector of Realms, and Hotel Yeti Way.

Head of Games at Play’n GO, Charlotte Miliziano, said: “Our artists have really outdone themselves. When working on a series, it’s so important to keep innovating; characters may change with their narratives but must remain consistent – it’s quite the task!”

More on the Swedish Brand:

Play’n GO operates in more than 15 regulated markets in Europe and this brand has huge market presence in various jurisdictions worldwide. The company is rated as one of the best in the iGaming industry. The main reason is that the developer has put a lot of energy into creating truly unique content. Some of its most popular slots include Tome of Madness and Riche Wilde. This brand was launched in 1997 and since then, has operated as a subsidiary of well-known companies until 2005, when it began to operate as an independent brand. It is committed to building high-quality games and has over 130 titles attached to its name. In 2019, it won an award for Mobile Supplier of the Year in addition to its superiority in developing mobile games. Further significant prizes won by the company included Best Casino Supplier of the Year and Best Employer Brand of the Year at the Malta iGaming Awards of Excellence 2019 event.

Diamonds of the Realm
399
PLAY