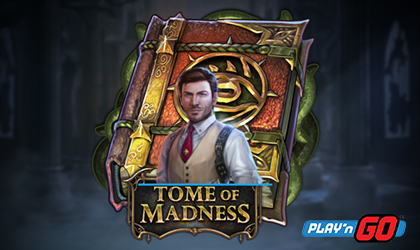 Rich Wilde started out as just another character in the slots world, only to become a true legend of the industry. So far, all of the games this fictional explorer starred in have been complete hits. So much so that Play’n GO chose to create an entire series of games dedicated to him alone.

With that in mind, the news of yet another release from this saga came as no surprise. Still, the release itself caused quite a bit of hype. The software studio behind Rich Wild and the Tome of Madness did its best to address the high expectations set for this game. As things stand now, it appears that their efforts paid off.

A Tribute to The Master of Horror:

“That is not dead which can eternal lie. And with strange aeons even death may die;” this quote from H. P. Lovecraft’s Necronomicon – a fictional book of magic that appears in many of his novels – perfectly sets the mood for the atmosphere of the new Play’n GO title. As a matter of fact, it is one of the first things you see and hear when you start the game.

We have seen Wilde in all kinds of settings in the past, but this has got to be the spookiest. The entire game is riddled with horror influences, but nothing explicit.

Title Anchored in an Engaging Base Game:

This new offering features a lot more than just an attractive theme. The base game itself is promising to be every bit as entertaining as the storyline behind it.

The studio that gave us Contact and other awesome titles, shuffled things up for this one. They went with a 5x5 cascading grid, several different wilds, and a few other, pretty creative features for this online video slot. As a whole, the title promises to offer great user experience across the board.

A Good Year for Play’n GO:

Rich Wilde’s latest adventure came out in the afterglow of EGR B2B awards. The supplier was recognized as Mobile Supplier of the Year – an award that is more than deserved considering their track record.

The latest addition to the series rides on the tails of this event. As many predicted, another installment in the series was never a matter of ‘if’ but rather, ‘when.’

“Of course, it was always in the plans to bring back a character as popular as Rich Wild, players love him and his games, so it was just a case of finding the right adventure for him to go on.”

Many are looking at this studio’s recent success as an indicator of things to come, especially in 2019. Törnqvist added:

“With our ambitions for 2019, we also felt now was a good time to bring him back into the fold and make him part of what will be our most successful year so far, and I’m sure he’s not finished yet!”

All things considered, Play’n GO rising to become one of the most successful software providers this year.