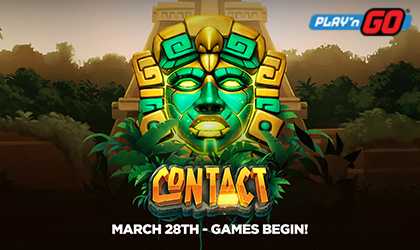 Mayan civilization has always been intriguing and interesting to people. People have tried to get a glimpse of their world by making various games, books and movies about it.

Here in the latest release by one of the most popular slot providers, Play’n GO players will once again get the opportunity to gain insight into their culture and uncover their secrets.

The Gods Are Trying To Reach You!

The slot is titled, Contact, and with it, this creative supplier wanted to renew the cascading video slot theme.

Those who are familiar with the gaming industry, know that Play’n GO are experts when it comes to the mobile gaming market and they have proven this fact multiple times.

The last time they did it was when they designed a game that was as equally good in portrait mode as it was in any other classic landscape mode.

Their First Game Fully In 3D:

They have previously created slots in 3D but this one was made by using this technique entirely, along with an angled camera view to give an entirely different and exciting experience to gamers.

The corporation was very excited about this whole innovation and stated:

“As the first fully 3D grid slot, Contact provides a truly immersive visual experience, to match the innovative gameplay. The 3D visuals allow us to be very creative with camera angles which gives this game an epic feel and provides a new dimension to a player’s session not yet explored in our titles!”

Developing a cascading grid was something they’ve tried out before and it turned out to be a perfect recipe for success.

Namely, they have implemented this innovation into some of their most popular titles, such as Sweet Alchemy and Gemix.

Furthermore, this slight improvement gave these games a certain twist that hasn’t been seen before.

How Is Contact Different From Any Other Video Slot?

Generally speaking, most cascading grid slots get rid of winning clusters because they want to make place for the new ones.

This reel slot does things differently. Namely, here, winning clusters are kept on the grid and the game just removes all other characters, enabling clusters to be enlarged and to allow the other ones to be created.

What About The Other Aspects Of The Game?

As we previously stated, the game revolves around ancient Mayan culture and the appearance and design of this slot amazingly capture this theme.

All in all, they are very thorough when it comes to developing slot machines. They perfectly showcased that with Viking Runecraft and now they did the same thing with this game.

They have spent a lot of time researching this subject and getting information about it, with a goal to create a video slot where every single aspect is done carefully, to make sure the experience is exciting and immersive for players.

Most icons here represent Mayan masks and their perception of animals like falcons, monkeys and snakes.