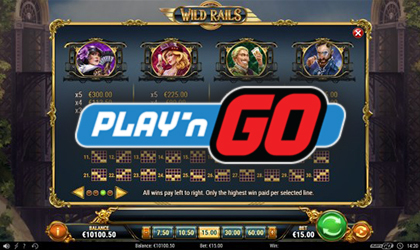 Play’n GO, one of the most active software providers in the industry, has announced the release of a new slot game. Titled Wild Rails, the offering utilizes an interesting horizontal reel layout.

It is worth mentioning that this new release belongs to a group of several new titles released by this prominent studio so far this quarter. If their previous titles are any indicator, Wild Rails should be a complete hit.

All Aboard the Bonus Train!

The studio behind this game has been producing high-quality games all year. Their quality standards for graphics alone have made them a hot topic in the industry. The fact is that Play’n GO recognizes the importance of visual stimulus when it comes to player acquisition and retention. However, they also understand that there is another side to that coin – one that is rooted in smooth performance and quality base game mechanics.

This latest addition to their portfolio is among the rare video slots that feature the notorious horizontal reel system. As a result, there are four reels spread over five different columns. The game offers a max bet of 90 spread out over 30 fixed paylines. That translates to a maximum potential win of 450,000 credits.

The studio took the theme to a whole new level with their special feature. Titled Wild Trains, it features four trains taking over the frame, bringing up to five wild symbols to the reels. Additionally, there is an extra spin feature that is activated by scatter symbols.

The scenery is another strong suit of this title. The supplier went with a picturesque gorge as a background and frame boundaries. Every reel begins and ends with a tunnel, thus further reinforcing the whole train theme. The game is available in partnered online casinos as well as mobile platforms.

A Good Year for the Brand:

This last round of releases came in the afterglow of the developer winning the Mobile Supplier of the Year award at EGR B2B this year. Receiving that type of recognition puts the company among a select group of software providers.

On top of that, the company has developed a dedicated following thanks to their Rich Wilde series of games. The release of the latest installment titled, Rich Wilde and The Tome of Madness caused a massive amount of hype for a slot game.

So far, it seems that the company has established a set of short and long term plans which perfectly match their appetite. Considering the recent success of this company, we will certainly hear more about them until the end of Q4 and well into Q1 of 2020.

One of the main stories related to the software provider behind Wild Rails is the one about their growth. This company has been prioritizing entering new markets as well as bolstering their presence in the ones they currently operate in.

Several sources claim that the main driving force behind this growth are new people. The company has been investing heavily in its team, employing new talents just about everywhere they have a presence.