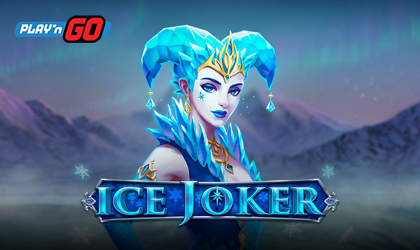 Play'n GO has gone live with its Ice Joker slow with 5 reels, 3 rows and 20 active paylines. The Joker series is a famous series of slots created by the provider, with a main goal to make the game more fun for players. The newest game brings the new Joker character, Isilia, who can use her icy powers to freeze the reels with a unique re-spin feature. An RTP of 94.23% is combined with medium-volatility and players have at their disposal a betting range which starts from $0.1 up to $100.

In order to create a higher level of entertainment, these series have provided players with not only fantastic games, but also top-notch performance, and the company also put more effort into the intellectual property of their stories, which means creating rich characters, storylines and environments where players are more connected. This famous series contains the Egyptian series, the Rich Wilde series and Norse mythology series. Each of them contains different games and characters that players are familiar with. With keeping this formula in action, the company has released some of the most successful and famous games.

Play’n GO, CPO, Martin Zettergren, commented: “Ice Joker is an excellent addition to, not just our portfolio, but also our joker series of games. It provides a new dimension to the series, but still provides it’s own unique entertainment. Our game families are not just about creating games; they’re also about creating legacies, and that’s what we’re doing here at Play’n GO. We will use the connection these series create to introduce players to new ideas and forms of entertainment, as well as creating new legacies for them to enjoy.”

Established in 1997, the Swedish casino and games software company, Play'n GO, has climbed the corporate ladder to become one of the most major providers of online games and casinos. They are pioneers of mobile gaming and the company was founded by a passionate group of technical experts. They have almost 300 employees and they operate under the licenses of the Malta Gambling Authority and the Alderney Gaming Commission.